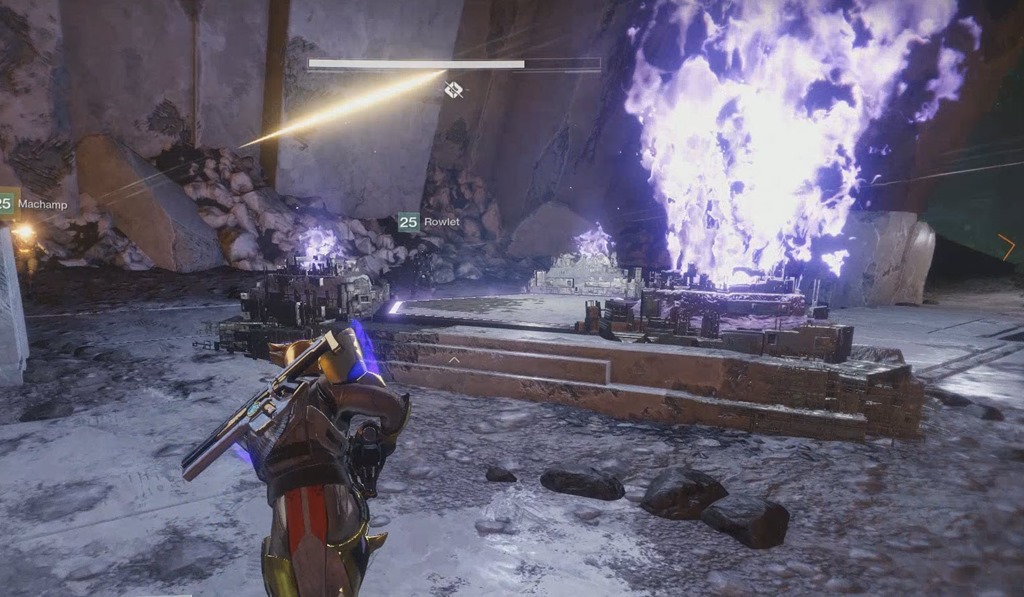 A guide to the Leviathan Eater of Worlds Raid lair released with Curse of Osiris DLC.

This fight is divided into several distinct phases.

The room to fight Argos is circular and divided into three areas. Each area will have a platform on which there will three fires of a single element type.  In total there will be three platforms corresponding to three elements (Void, Arc, and Solar). The area you start the fight will be Void. To the left of it is Solar and to the right of it is Arc. 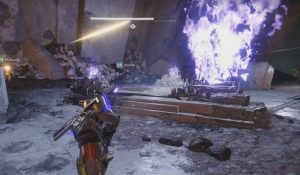 Argos will have a massive rhombohedron shield covering him that makes him immune to all damage. You can open this shield temporarily by doing the energy collection phase. Only one side of Argos’ shield can be opened at a time and this side is one of the three areas. To see which side it is, go to each area and look at Argos until you see three orbs on the three corners of Argos’ shield. When you spot this, call it out to your group so they know where to position themselves to open the shield. 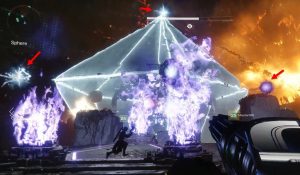 Also scattered around the fight area are six Vex Craniums. They are eventually scattered around the room and some won’t spawn until you pick up one nearby. What you want to do here is to bring the Vex Craniums to the platforms with the fire corresponding to the elemental color of the orbs you see on Argo’s shield. So if you see 2x Blue and 1x Purple Orb for example, bring 2x Vex Craniums to the Arc platform and 1x Vex Cranium to the Void platform. You want to interact with the elemental fire while carrying the cranium and this will give you a button to energize the cranium. The cranium will be “cooking” for a few seconds (~20 seconds) and then it will be ready for use. 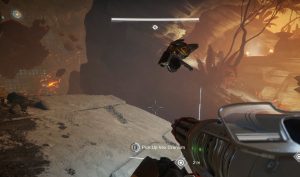 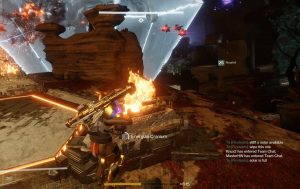 While you are going around gathering Vex Craniums and energizing them. Massive waves of Vex will spawn. This includes the standard Vex Goblins, Fanatics and the elite shielded Vex Minotaur. They are attracted especially to platforms where a Cranium is being energized and those not holding a Cranium should devote their time to clearing the adds. Hunters can use their Nightstalker elite to clear out adds and drop orbs to recharge Supers of your teammates so they are ready for the damage phase.

Once all six Vex Craniums have finished energizing, it is time to open up his shield and deal damage to Argos. Make sure the designated players have grabbed the energized Vex Craniums corresponding to the orbs on Argos’ shield. Rest of the Vex Craniums should be sitting on the platform in the area where his shield will be opened and all energized.  Clear all the adds in the area and then have the three players holding the designated Vex Craniums shoot the orbs with their Craniums. They should do this roughly around the same time and the three orbs will go in the hole in the middle.  This open up Argos’ shield. You should have a small amount of charge left in each Vex Cranium. Aim them at Argos’ head, each tick does massive damage. 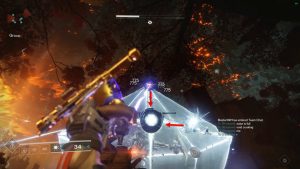 The players not using the Craniums to open up Argos’ shield should each grab an energized Cranium once the shield is open and aim it straight at his head. These Vex Craniums deal massive damage to Argos during this damage phase and is absolutely essential in getting him down. Once you have used up the Craniums, use your Supers, Power weapons (Cluster Rockets like Curtain Call or Sins of the Past will do massive splash damage) and class abilities such as Rally Barricade or Empowering Rift to do as much damage as you can to Argos’ head. Ideally you should aim to bring him down by 25% of his HP every damage phase.

While you are damaging Argos during this phase there are two things to beware of. Argos will shoot nets at random members in the group. You can destroy them while they are in the air but they move extremely fast. This net will grab players and throw them up in the air towards Argos. This will result in their immediate death unless the trapped player is rescued. To rescue them all you need to do is to shoot at the nets to break them. Beware that the nets will immediately cancel your active Super so getting hit by one is a huge damage loss. In addition to the nets, Argos will spawn harpies in the air. If they are not killed, they will home in on a random player like a homing missile and explode all over them dealing massive damage. 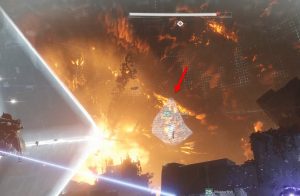 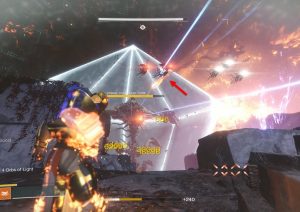 Void Energy Spike is a phase on a timer where you must destroy two of Argos’ weak spots or face an immediate raid wipe. It usually occurs a few seconds after a damage phase (depending on how late you opened Argos’ shield). During this phase Argos’ shield will completely open and circular platforms will spawn around Argos that allow you to get around Argos. Since this phase occurs on a timer, you might have some time to fetch Vex Craniums and get them energized to prepare for the next damage phase. Keep in mind though that any Vex Craniums that are not energizing on a platform when this phase begins will disappear (even ones you are carrying) 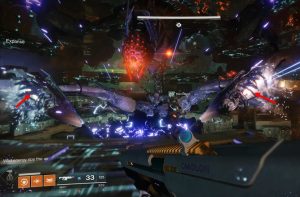 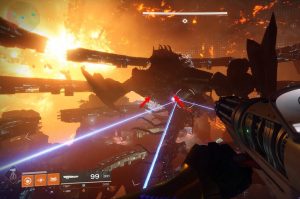 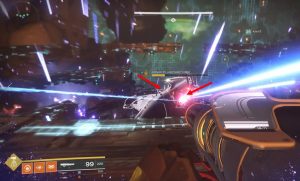 To destroy these weak spots you must as a fireteam deal continuous damage to it until it breaks. If no one shoots at it it will regenerate its HP. When you see yellow numbers popup, you have hit the correct spot. Otherwise you will need to reposition yourself to find a place where you can shoot at it. The white spots will glow in red shortly before it is destroyed. 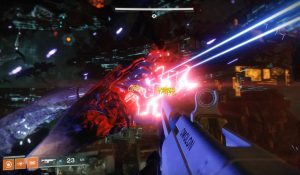 There will be three of these Void Energy phases during the fight so typically you can as a group coordinate so that you destroy both of Argos’ hands in the first phase, then the neck, and then finally the top of the head at the last phase.

You should have a few seconds after destroying the weak spots to do some damage to Argos but you don’t have the damage boost in this phase so you will barely move his HP.

Over the fight with Argos is a repeating pattern of Energy Collection –> Damage Phase –> Void Energy Spike. This pattern will repeat until you get the fourth Damage Phase. After that Damage Phase is an enrage phase where you will do regular non-boosted damage to Argos for a few seconds before he explodes and kill everyone. This enrage phase is only useful if you somehow finish the last damage phase with a silver of HP to spare on Argos. Otherwise you won’t have much hope of killing Argos.

This fight have a very tight DPS check so you need to use the skulls to boost your damage during the damage phase and stack as much damage as you can during that phase.