We’re bringing you what we call a “mainline” update today. This is every fix and QoL change we have been working on since October in addition to content drops. 22.6.0 sets the stage for a bigger end of year Update that includes Khora and more!

It’s important to note that sometimes mainline updates can be rocky since they have deep overhauls for optimization within.

We will be actively watching for bugs and your feedback on the additions and changes below!

Dynamic Weather in the Plains of Eidolon!

The Plains of Eidolon now have changing weather patterns! This new dynamic weather system brings rain, lightning, rolling thunder, as well as fluctuating wind and cloud patterns. The Plains can shift from sunshine to rain (and vice versa) during the day and night, and rain will linger for a reasonable amount of time.

Jumping in puddles isn’t the only good thing about being out in the Plains during the rain! Take advantage of increased fish spawns and reduced visibility for the Grineer while it is raining.

A rain slider has also been added to the Plains of Eidolon Captura Scene. Adjust the slider from a light trickle to total downpour and capture your dramatic side!

Since the launch of Focus 2.0 in Update 22: Plains of Eidolon, you have shared your thoughts and suggestions on where we could improve on Operator gameplay as a whole. Focus 2.5 is a reflection of what we’ve learned through your experiences, and acts as a jumping-off point for future implementations that need more consideration before they reach you (daily cap removal for example).

Below you will find a breakdown of what has changed in Focus 2.5. If you would like to read more about our intent and motivation for these changes, and some of our future plans for Operator gameplay, head on over to “The Features of Focus 2.5” Dev Workshop thread .

We have added shared pool capacity! You can now upgrade your pool size using the points from any School you wish, which increases the maximum capacity for every school all at once.

You can increase pool capacity from your active tree. Simply select a School of choice as your “primary” and use its Focus points to increase the shared pool capacity.

The ability to increase capacity from within the tree itself still exists, but these points will contribute to the shared pool instead.

The costs of unlocking nodes across all trees have, on average, been reduced by almost 30%. The table below compares what a 5 rank passive node (like Zenurik’s Energy Pulse) costs before and after these changes: 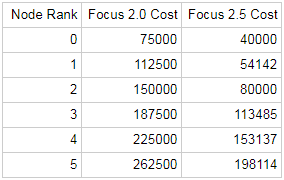 We are excited to see how you feel about these changes, and will be collecting your feedback on Focus 2.5 changes in the dev workshop we posted earlier this week.

Incursions in Plains of Eidolon Caves:

The following Incursions can now occur in Caves scattered around the Plains: Exterminate, Assassinate, and Cache Recovery. The objectives in these Incursions are the same as they are in the Plains, but there is now a chance for these to randomly take place in caves!

The intent of the following changes is to make fishing a more harmonious experience for you and your squad! Until now, Bait, Dye, and Pharoma has only exclusively affected the player who used it. Moving forward, all squadmates will receive benefits from Bait or other fishing consumables in the Plains. The fish you see will still vary from player to player, however, the effects of these consumables will be shared across all members.

When making this change, we also reviewed how each of these consumables worked and tweaked them slightly for the sake of consistency and balance:

*In order for Luminous Dye and Pharoma to work within this system, they are now thrown like bait. They float in the water and affect all fish in the same body of water within a certain radius. This way you can cast out the Dye in one place, and all players will see the fish get highlighted as they swim near it. Multiple Dyes can be used at once, if you want to affect a larger section of the water.

Finally, we made the following changes and fixes to fishing:

Gara is still relatively new as far as Warframes are concerned but since her release, we’ve found (and many players have found) that an invulnerable and almost impenetrable barrier doesn’t allow for a very engaging gameplay experience. We know that other Warframes also have Powers with similar issues, but adding a shattering component to Mass Vitrify is a change we could easily implement that is consistent with Gara’s glass theme while also making Mass Vitrify more interactive.

With these new changes, we can tweak the absorption and explosion values as necessary to make sure Mass Vitrify is both fun and effective. Please keep your feedback constructive and let us know what you think after you’ve had a chance to test these new changes.

We previously announced changes to Discharge in this thread. But after further testing, we found that the changes were a lot more powerful than anticipated (we’ve included a video below). As a result, Discharge has not been changed yet. We will continue to work on Discharge improvements before releasing them in a future update. Sorry for getting anyone excited prematurely for Discharge! We appreciate your patience.

Notes:
We have temporarily disabled gifting while we investigate potential problems; we hope to have this restored ASAP.