Crowfall Gear Up For The Male Nethari And Half-Elf 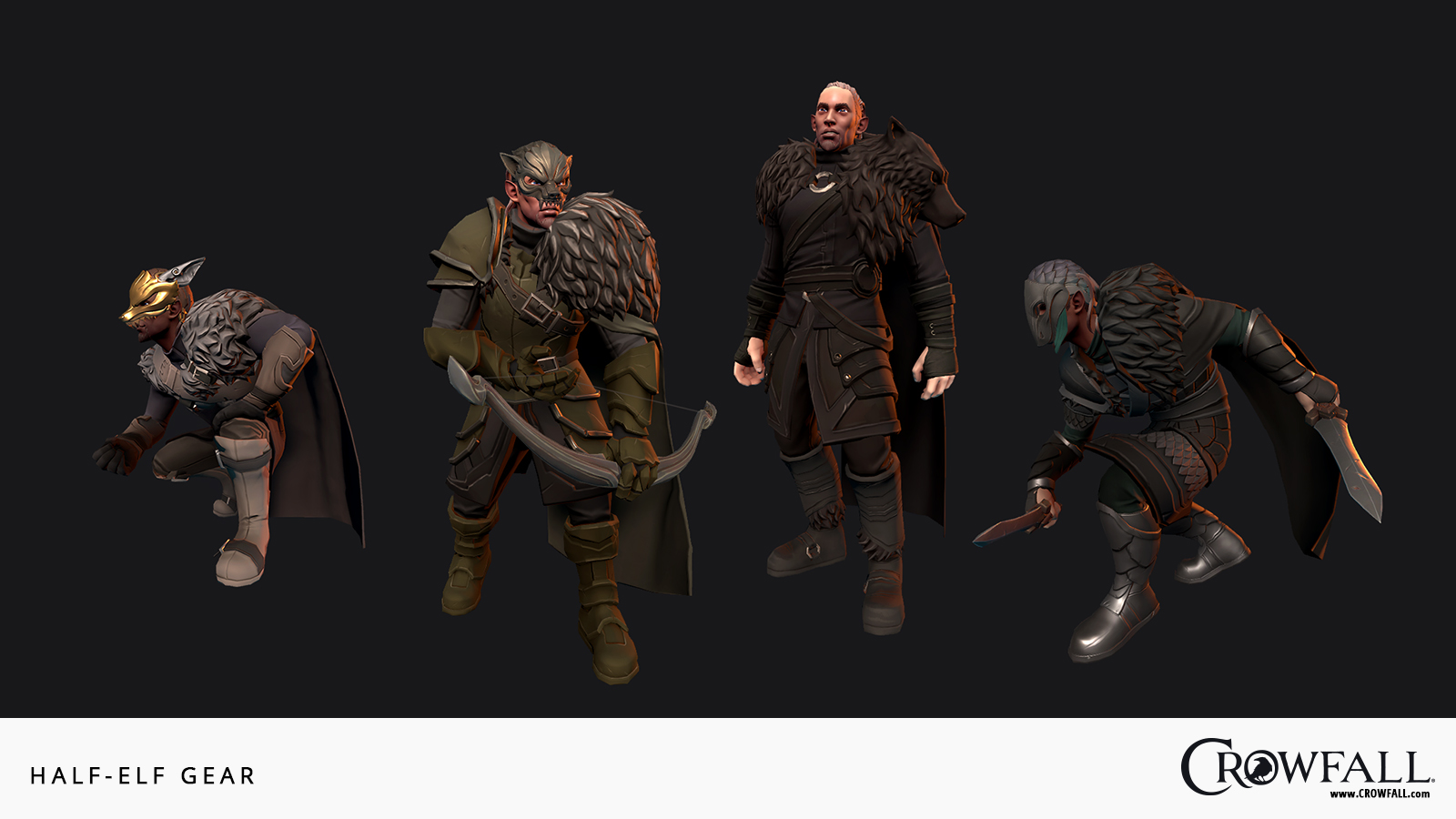 This is Melissa writing to you today from the visually exciting realm of the Crowfall® art pit! We’ve got a couple of new characters in the customization mix that you’ll be able to play with soon: the male Nethariand the male Half-Elf. For those of you that play a Confessor, Templar or Assassin, the male Nethari is now available. For those of you that play a Ranger, Assassin or Druid, you now have the male Half-Elf as a gender/Race combo.

I’ve gone into the history informing the art direction for both of these Races in a previous update, but I’ll recap a bit here.

The Nethari are really a sect of the Human Race that value themselves superior to every other Race, including other Humans. Followers of the Church of Arkon, they seek to purify the inhabitants of the worlds of their sins and transgressions. These mages wield the arcane magic of fire and that magic burns through their flesh in the form of glowing runic symbols. The male Nethari gear is reminiscent of their female counterpart, but we really wanted to maintain the robed look of the earliest concepts we did for this Race. You can see in these side-by-side images how we incorporated some of the materials and design elements of the female gear into a robed set for the male. I think the goal of blending these two ideas yielded some unique and interesting designs for him that are atypical of classic mage robes.

The Half-Elf gear was originally fully-fleshed out as a concept for the female gender. The inspiration for their gear was a bit of the Night’s Watch from Game of Thrones and a bit Ranger from Lord of the Rings. Shrouded in dark fabrics and leathers, they blend into the night and the shadows and walk among the creatures of the world without notice. The animal masks lend a sense that this Race may be more in tune with the creatures of the world than they are with Humans or Elves. They may even see themselves as outcasts to a degree, being neither Human nor Elf; they belong to no culture and find themselves more comfortable among the trees and the wolves. 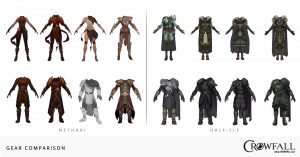 It’s not all cosmetic; we’ve taken measures to further optimize how our characters are handled technically. The Humans, Nethari, and Half-Elves now all share a master rig (or skeleton). When a new character is added like the male Nethari, the animators (or “Taters” as we like to call them) will skin the new equipment onto the master rig and transfer all existing animations onto the new model as necessary. The Humans, Nethari and Half-Elves have some cross-over with some of the Classes that they can play so this sharing saves us a bit of time and overall memory footprint. These kinds of measures help to alleviate some of the development costs of such a diverse character customization system.

Since the Nethari are technically Humans, they’ll share the same head options as the Humans but will have some unique choices for their Race. We will have different eye options, hair options and glowing skin tattoos. Those options are not online just yet. There are a few kinks to work out in the system right now before we can implement them, but be on the lookout for those choices as the system gets developed further.

Half-Elves also share the same rig and base body as the Humans and Nethari, but they will have entirely different head and hair options. We have one option in for testing right now but we will be adding more in the future.

Customization options and new genders will continue to come online throughout the remainder of the project. We are ironing out some of the wrinkles on a limited set before we start introducing cosmetic options for the other Races. Equipment colorization will then come on the heels of the cosmetic system becoming more finalized. In the meantime, check out the male Nethari and Half-Elf and give us your feedback! Oh and we’ve also got some boss horn options in for the Minotaur, so check those out in game! 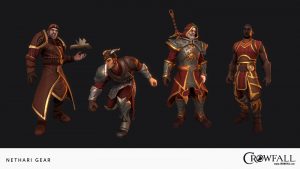 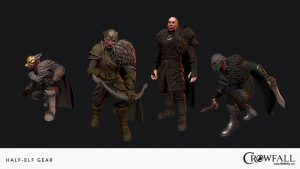 Have fun with the new choices and understand that these are not complete. We want to get them into your hands as soon as we have them functional so you have something new to tinker with and give us feedback on. The High-Elf female and male are in the works right now, so be on the lookout for those making it into the playtests next!