[Dev Talk #02] The story behind the world of Bless Online

Today we will be sharing the story behind how we built the living world of Bless Online – specifically the monsters, terrain and buildings.

We wanted to make Bless Online an authentic and unique fantasy world, rather than take an existing legend or myth and simply apply it to Bless. We aimed to make something new but still stay true to the essence of fantasy worlds.

This philosophy guided our choices in deciding how to create the races, cities and other aspects of Bless. For example, when creating the dragons, we did a lot of research about the appearance of dragons in myths and legends before deciding that a “classic” dragon type was the most suitable for the Bless fantasy world. In short, we wanted our audience to see a Bless dragon and say “Yes, that’s exactly what a dragon is,” not “It looks like a dragon.” We wanted to capture the essence of what a dragon is in our designs! 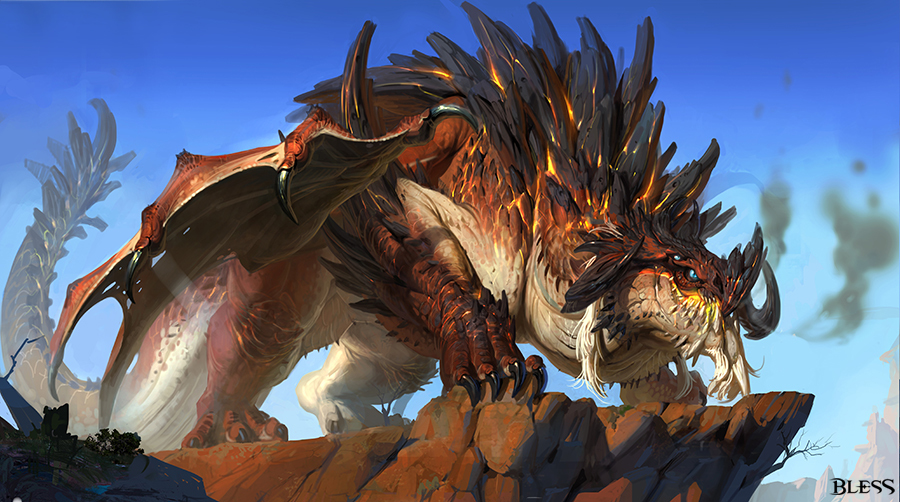 The Probable World of Bless

While creating the world of Bless Online, the most important element was ‘probability.’
By probability, we mean “is this likely to actually happen this way? Is this the best way for it to be set up?”

For an example, let us look at the character type “Lizard Person.” it would be very disappointing if a character type as interesting as a “Lizard Person” didn’t appear in Bless. We want this kind of character. However, there is no definite idea of what a lizard person actually looks like. Since we have no real-life reference, we have to think about what a lizard person might look like. What if lizard people evolved into a human-like form? What would it look like? What things might change physically as a lizard evolves towards being bipedal? By approaching the lizard people’s design with thought-provoking questions like these, we were able to add interesting creative elements to Bless.

“Would lizard people be living in this kind of environment?” 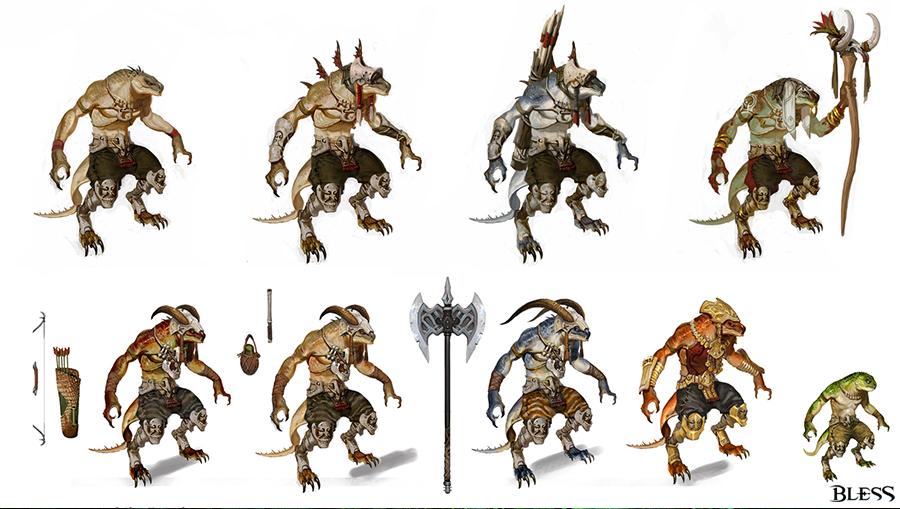 Rather than reducing the lizard people to “just another monster,” Bless shows the lizard people as an intelligent race with the ability to walk on two feet and use weapons. We designed for them a whole society and culture, in addition to a completely new environment which they will live in.

What about the Naga?

The Naga is a unique race that possesses several arms and a snake-like lower body. They’re a fairly popular race in fantasy, but we wanted to make them our own; aimed to create a Naga race unique to Bless Online to communicate the stories that we want to share.

We wanted to create a setting in which the Naga race made sense and fit in. Towards this goal we created the area of Gnollando Barrens, and designed a Naga society and culture filled with history and tradition. We designed their appearance and habitat to match this same idea of the Naga race.

We endeavored to fully realize all aspects of each Bless creature’s culture through their appearance, weapons, armor, and architectural style.

You may be wondering whether all of Bless Online’s hundreds of monsters were this meticulously designed. To that the answer is yes! All intelligent creatures were created with consideration towards their culture and society. That being said, not all monsters within the game are intelligent (wild animals such as mice and rabbits are not, for example).

Bringing authenticity to an image

Although Bless has beautiful graphics, we think that the visual aspects of the game are something of importance only when paired with the background story of the Bless world.

Rather than being just “a game with beautiful graphics,” Bless Online is a game where “the various aspects that make up its world are designed in considerable detail.”

For the creation of a completely immersive world, there were even instances where we gave up on more beautiful or more impressive visuals for the sake of believability. For the visual completion of the game we did lots of background research and even conducted field surveys in order to study specific architectural styles!

Most of you who have been following Bless for a long time are probably most familiar with Spezia and Hieracon. The design of Spezia, the city of water, was inspired by Italy’s Venice, while Hieracon was based on French gothic architecture. 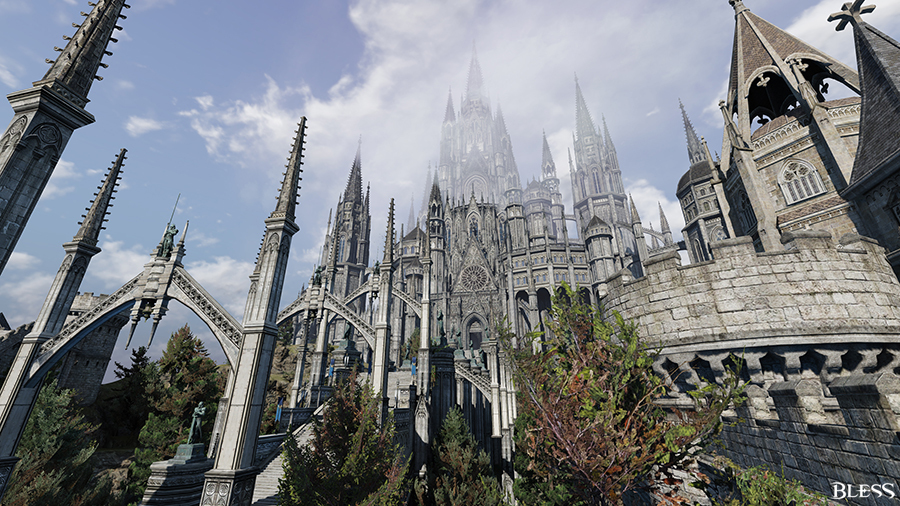 Wyvern Valley (located in the middle of the Bless continent), a place where Wyverns should be able to travel freely while gliding around, was an area designed with the Grand Canyon in mind.

Why is Bless so focused on Probability?

We emphasize probability and believability because we believe that the in-depth aspects of Bless Online would become the basis for why our players would be able to immerse themselves into the game and fully enjoy it.

Including both the natural environment (climate and vegetation) and the social environment (history and culture), we aimed to think closely about even the smallest details in Bless Online. Our biggest emphasis was placed on the possibility that those aspects could come together in the creation of a world.

For us, what mattered most wasn’t whether it “looked nice enough”, but instead “does this make sense in the world?”

As we’ve explained, Bless Online is a game that focuses on the often hidden, deep details of the world. Because of that, we believe that Bless is a more complex and interesting world, and players will be able to have a more immersive experience in it.

Hopefully you had as much fun reading about the story behind the world of Bless as we did making it!