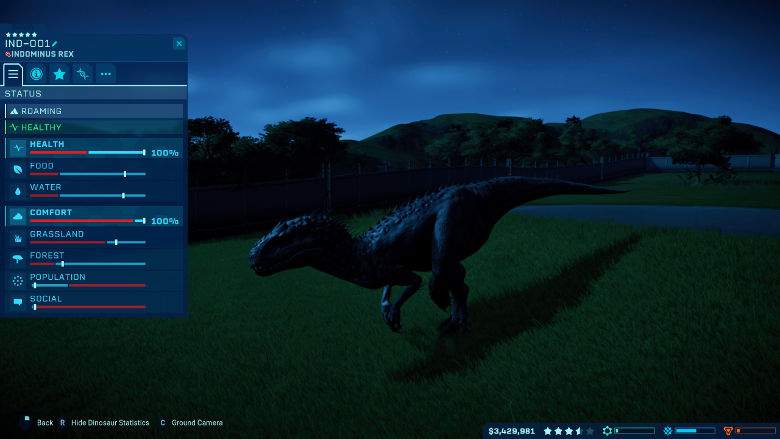 Jurassic World Evolution is a dream come true for a fan of theme park builders as well as someone who likes dinosaurs.

Frontier, the developers behind Roller Coaster Tycoon and Planet Coaster, have a new game that puts players in control of the five islands of death mentioned in the Jurassic Park franchise as they repopulate the islands with dinosaurs and try to succeed where Jurassic Park founder John Hammond couldn’t.

The game is narrated by Dr. Ian Malcolm, voiced by Jeff Goldblum who reprises his role from the film franchise. He has a unique dialogue for many things in the game, including the Indominus Rex.

The Indominus Rex is brand-new dinosaur that was first introduced in the 2015 film Jurassic World. The Indominus served as the primary antagonist as it was a special blend of T-Rex and Velociraptor that allowed it to be more powerful than any dinosaur before it.

From there, it costs about $2.5 million to incubate the new dinosaur so you’ll need to have a pretty successful park going on to raise the money for this. The Indominus has the power to turn your dinosaur rating into a powerhouse.

The Indominus Rex is a surprisingly easy dinosaur to please. It doesn’t need anything else around it so you can put it into a pen all by itself if you please. All it needs is some food, water, and minimal forest and you’re good to go.

The Indominus tends to kill any other dinosaur you put in an enclosure with it so it’s more cost effective to leave it all alone. This is certainly one of your bigger ticket dinosaurs you’ll want to make sure your guests have several ways of seeing this attraction.

Having the Indominus Rex will be very important once you make it to the small island because there isn’t a whole lot of space for dinosaurs on the island so you’ll want to make sure you take advantage of the space available. Having a T-Rex and an Indominus Rex in your park will surely be a hit with the guests and bring your park rating way up.

Jurassic World Evolution is available now on Xbox One, PS4 and PC.