Crafting Update – a long-awaited expansion, which adds a completely new type of crafting processes and expands the crafting gameplay, adding more in-depth to it;
Player-built workshops – expansion of the player-spawned objects system, giving you a possibility to build your own metallurgic furnaces!
Recipes Update – a series of tweaks done in to enhance the user experience, improve the learning curve and make crafting your goods more convenient;
Halloween Update – brand new world event with new party mechanic designed for smaller groups, taking place in a unique, Carribean/pirate-themed new location, with unique rewards – including skins for a campfire and the top-tier furnace – and the return of the Spooky Fox!

It’s one of the largest Gloria Victis updates we’ve ever released. Hope you’ll love it as much as we do!

See you in battle! 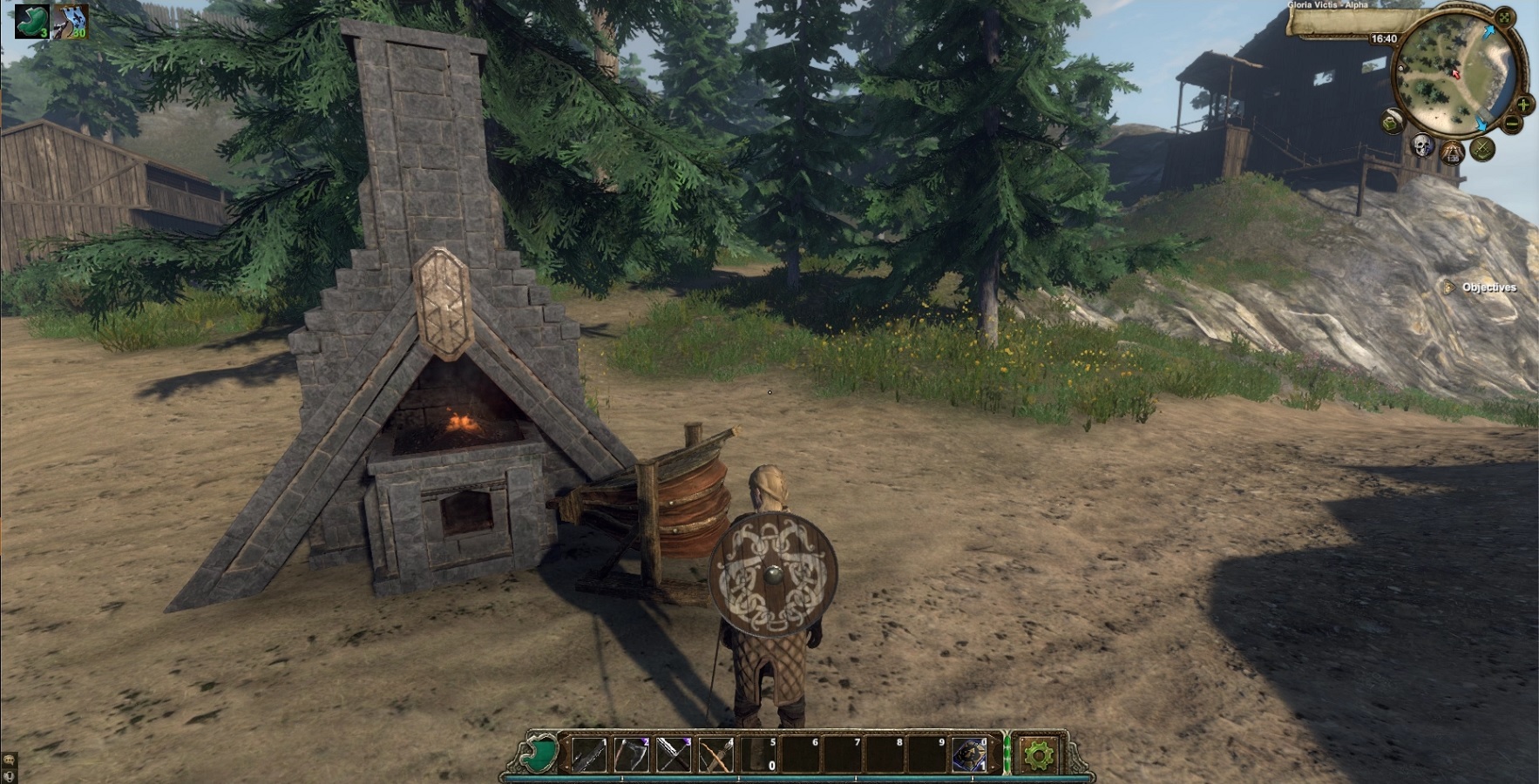 – Soft-launched the new materials processing system which lets you to create metallurgic materials and reheat meals using the player-built furnaces, which require remaining demanded temperature using appropriate fuel; this change expands the crafting gameplay to make it more interesting and increase its’ variety
– Introduced 4 tiers of the player-built workstations: Campfire (replaces the previous Campfire which was a standard workshop), Bloomery, Furnace, Metallurgic Furnace – they vary with min/max temperature value and available recipes
– Added recipes of new furnaces – Campfire is learned by creating a character, Bloomery and Furnace can be bought from a Merchant vendor in the capital city and Metallurgic Furnace can be bought from the Quartermasters of Lord’s Wrath Abbey, Lordly Haven and Hordun Temple
– Added 7 skins for Campfire (lowest tier of workstations), including a Halloween skin: Berserker’s Night
– Added 3 skins for Metallurgic Furnace, including a Halloween skin: Hell Furnace

Due to a soft launch of the player-built workstations (furnaces) in which you can melt iron ore into metal, the metallurgy recipes have been updated. They are still temporary possible to create with the standard crafting, until we are sure that the workstations system is polished enough. List of changes:
– Updated the amount of fuel in recipes available at furnaces: Iron Lump, Doped Lump of Iron, Steel Bar, Dziwer Bar, Bulat Bar, meals reheating, meat roasting, Quicklime, Quartz Glass, Chamotte
– Removed Iron Grivna and Iron Sheet from the alternative materials used in the Iron Lump recipe since they were removed
– Doped Lump of Iron is now 1 tier lower and is an alternative to Siderite, and from now on its’ recipe requires Doped Pyrite and Aqua Fortis
– Replaced Grinded Calcite in the Dziwer Bar recipe with Calcite Crystal, since Grinded Calcite was removed, also the Doped Lump of Iron can be used as an alternative to Siderite
– Replaced Graphite Dust in the Bulat Bar recipe with Graphitem since Graphite Dust was removed
– Replaced Quartz Sand in the Quartz Glass recipe with Quartz Crystal, since Quartz Sand was removed
– From now on, Chamotte recipe uses Kneaded Clay and Quicklime
– Removed Carrot and Exquisite Venison from the Food Vendor assortment – from now on, carrots have to be planted using seeds and venison has to be obtained from hunted bears
– From now on, weapons of the lowest tier are crafted using raw Limonite instead of Iron Lumps 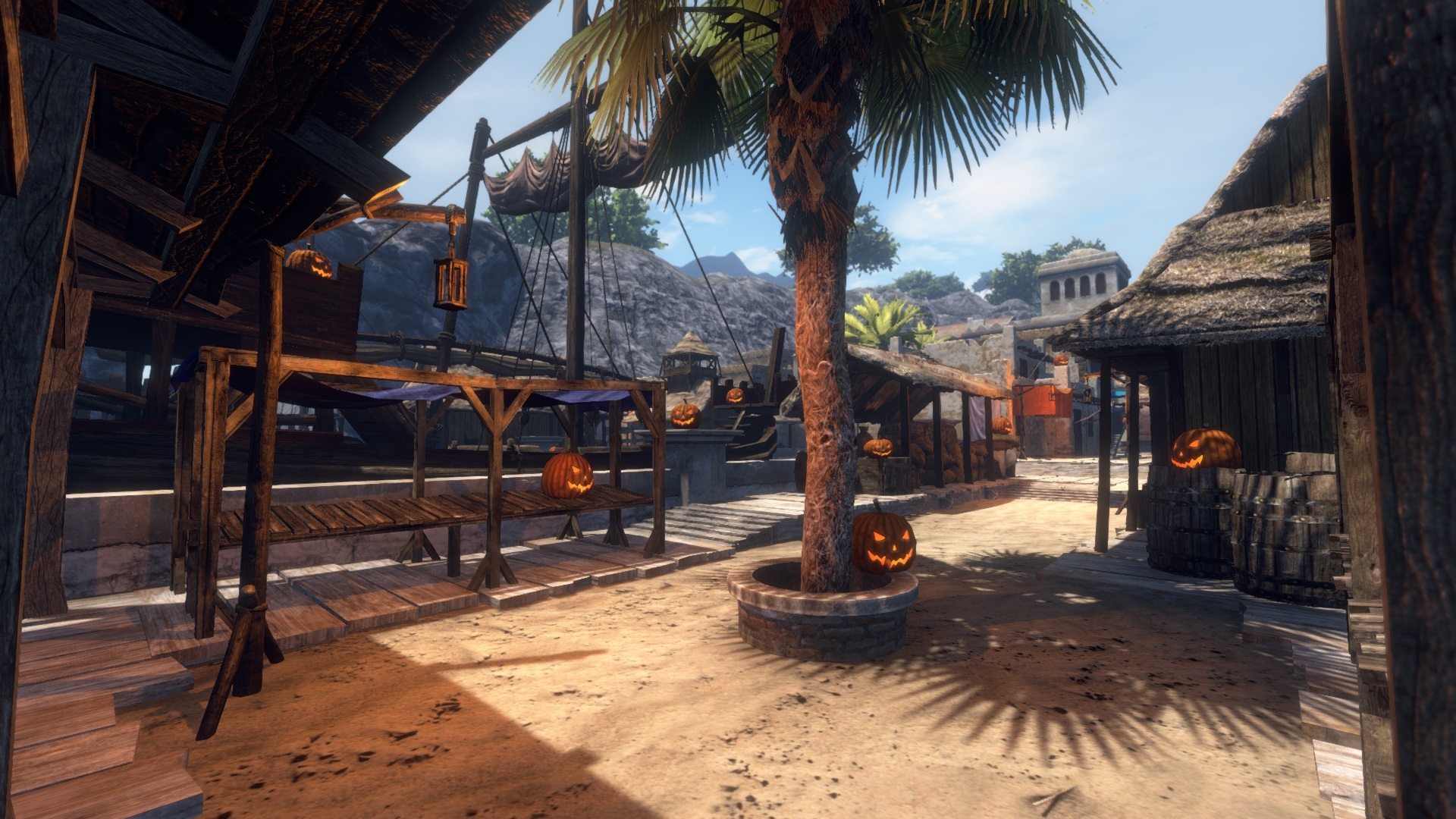 – Added a new world event designed for up 2 parties (max 1 per nation) of 5 players – it can be started by delivering map fragments in port area of each capital city; in order to enter the event, you have to be in a party of required size and join the event through an invitation pop-up window; the 5-players party mechanic was added to expand the content where players numbers are equal and no nation can outnumber the other one; also, thanks to this system each nation has equal access to this event, regardless of the current control over locations in the world
– Added new location where the new world event takes place, which has Halloween-themed decorations
– Added an unique chest near the new world event location
– Spooky Fox comeback – replaced the minor bosses in the Volcano world event with Spooky Foxes for the Halloween period
– Added time-limited Halloween reward to loot of the Bloody Torturer in the catacombs world event
– Added more spawns of Sailors and Slave Hunters near Scarsdale and Seaclaw, because there were much less of them in the Sangmarian area than in the Midlandic and Ismirean lan ds
– From now on a player who accepted an arena duel will be removed from the queue if they move or receive damage and in consequence won’t be moved to the arena
– Improved Level of Details of the player character’s model
– Added meat cooking and meals reheating recipes to the starting recipes
– Further improvements the smoothness of the humanoid NPCs and environment models appearing on the player’s screen
– From now on NPC enemies which have been attacked and have no target player to fight, will call all surrounding allies with no target within their close range to fight the attacking player
– Expanded the AI dynamic learning and adapting to situation for NPCs fighting the new players (greenleafs), which adjusts the difficulty depending on the combat result