What makes this stage different is that you can obtain a blue gem here and it is a bit easier to obtain it than the rest of the gems. This generally results from the fact that the stage is short. The most dangerous threat are the barrels that will make you feel as if you were playing Donkey Kong. 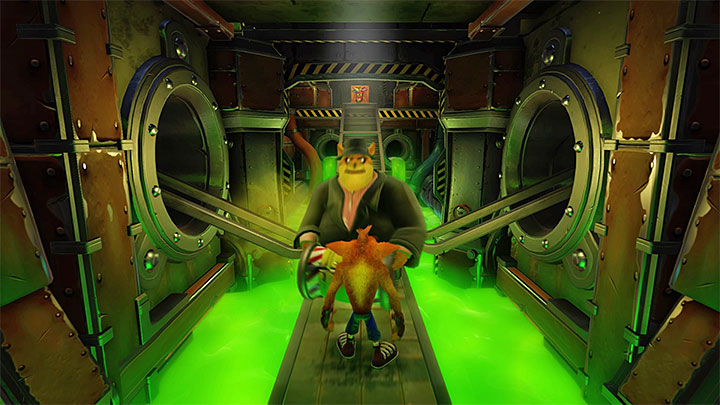 You encounter the first opponent right after the stage starts. Opponents toss barrels at you and, initially, they only roll over the ground. You an avoid them either by jumping over them, or hiding to the sides of the path. It is especially recommended to use the other one here, because you can smash several crates thanks to this. When it comes to the opponent himself, head towards him and jump over the barrels. After you get within a short distance of him (shown in the above screenshot) Spin-attack him to eliminate him.

Start traveling on the canals. Take care while climbing the ramps, because you can easily miss more barrels. Additionally, remember about destroying all crates encountered, especially that some of them have hidden tokens from Tawny’s likeness. 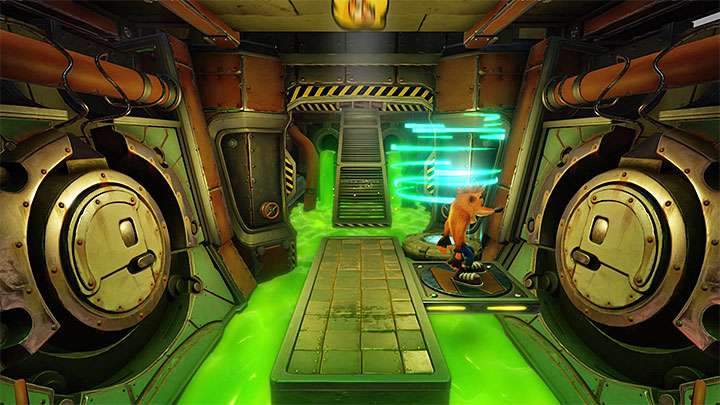 Continue your exploration and eliminate barrel-tossing opponents. After you reach the ledge with the first TNT crate, you will have to deal with barrels bouncing off the ground, which are more difficult to handle. After you spot such a barrel, stop and try to guess where the barrel touches to the ground. This will help you dash under it.

In one of the tunnels ahead, you will spot a tower on the right, built of several types of crates. Smesh the two crates in the middle and get away from here quickly. A bit ahead, you will find the third token and the portal to the bonus round (shown in the above screenshot). In the secret location, you gave to smash 13 crates. This one is easy to complte, but you have to remember to escape from the TNT crates as quickly as possible, because one explosion causes a chain reaction.

After you return from the bonus stage, continue avoiding the barrels and be careful while climbing up the ramp, because it makes it more difficult to assess where the barrel touches the ground. Eliminate the last opponent and enter the portal into the next stage.

Note – After you have completed this stage, you will have to fight against boss Pinstripe Potoroo. The fight has been described in a separate part of this walkthrough.