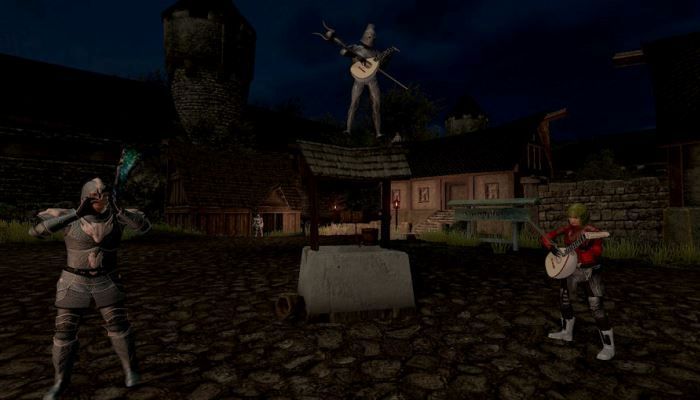 Welcome to another large Project: Gorgon patch! This is a dense update with a lot of moving parts, including balance changes, new powers and abilities, and a large new dungeon. And these are some really long update notes… so let’s get to it!

Rahu Sewers
This update includes a new solo-oriented dungeon, the Rahu Sewers. This dungeon hides many secrets and is home to new types of level 60 creatures. Some of these monsters pose new challenges to overcome, and the dungeon itself holds various tools to help you overcome them. (Along with the many tools that already exist in the game!)

The sewer is balanced around players who have decent level 50-55 equipment. We know that it can be difficult for solo players to get gear in the level 50-55 range — that’s something we’ll be working on in a future update! If you don’t feel that your equipment is up to par, you might consider some pick-up duoing with another player in the short term. (And remember: being in a group boosts the XP you both earn, too!)

While the dungeon is intended for solo (or duo) play, there are also a few Boss monsters tucked away as challenges for pick-up groups. They aren’t pushovers, though. If you run into a boss warning screen, don’t get complacent: the boss curses here are real!

A few NPCs in Rahu have favors connected to the sewer, although you need to meet certain requirements before those favors are accessible.

Game Balancing Changes
There are quite a lot of changes in this update that touch on high-level game balance and underlying damage formulas. This section gets really dense, so feel free to skip ahead if your eyes start to glaze over. (If you do skip ahead, just remember: There may be bugs. If it seems weird, report it!)

We want to get you up and running with these changes quickly in order to help us gather data and feedback, and to find the less obvious bugs. So for the next week(-ish), transmutation tables will not consume enhancement points when you transmute an item. This will give you a chance to re-configure your equipment a bit more quickly and easily.

In conjunction with these changes, we’ve also reduced the health of all Elite/Boss monsters by 12% to 30% (depending on the level and tier of Elite/Boss). This adjustment is really just an initial estimate on our part, though; there have been a large number of combat changes, so it’s difficult to predict how much damage player groups will be able to deal at top level. This is one of the areas where we’ll be gathering feedback, and we will buff or nerf monsters as needed.

Percentage-Damage Treasure Rebalance
Treasure effects that boost a specific ability by a percentage (such as “Finishing Blow Damage +25%”) are now a bit weaker. A typical ability that had two percentage-based treasure buffs will be reduced in damage by about 8%. But it’s difficult to talk about a “typical ability” in this game! The exact impact will depend entirely on what treasure buffs you use. (And the other combat changes described below will affect it further.)

To give a feel for what this change means, here are some examples from the Sword skill. Other skills have changed in a similar fashion. (Note that the numbers used here are for level 80 treasure effects, which cannot yet be found in-game. That’s the worst case scenario, so the actual change for you will be a bit less than you see here.)

Damage-Type Calculation Changes
This update also changes how damage-type-specific buffs are calculated. Previously, these were added very late in the calculation process. This meant that a flat damage-type buff such as “Slashing Damage +5” would indeed add 5 to the damage, but the +5 wouldn’t get multiplied in with other ability multipliers. This is different from most flat bonuses which are added in before multiplicative bonuses. On the other hand, percentage damage-type buffs such as “Slashing Damage +10%” benefitted from this setup, because they were a separate multiplier piled on top of everything else.

Damage-type-specific buffs are now calculated exactly the same way as other buffs: flat boosts are added to the ability’s damage first, then all multiplicative boosts are added together before multiplying by the flat amount. This means that flat damage-type boosts (“Slashing Damage +5”) are more effective, since other ability multipliers now include them. But percentage damage-type buffs (“Slashing Damage +10%”) are weaker because that percentage buff is now lumped in with other percentage-damage buffs.

Whether this is a “nerf” or a “buff” depends on the particular treasure and abilities you use. Treasure like “Double Hit causes your next attack to deal +100 damage if it is a Crushing attack” is more potent, but treasure like “Piercing Damage +16% when Animal Handling Skill Active” is weaker. We didn’t make this change specifically to nerf or buff anything — we changed it so that it’d be easier to understand and remember, for both players and developers! (In fact, many of the existing treasure effects were designed with the assumption that it worked this way already, because we’d misremembered how damage-type calculations worked. Hence the programmer mantra: “Having fewer special cases is better!”)

We’ve made some changes to specific abilities and skills as a result of this change — as described in the lengthy notes below — and we will make additional revisions in future updates as necessary.

Base Damage Changes
Base Damage Multipliers are one of the few special cases we intend to keep around. Base Damage Multipliers increase your ability’s damage, but they aren’t supposed to be multiplied by anything else. In theory, if your Sword attack does 100 damage and you have “Sword Base Damage +10%” treasure, the treasure should never add more than 10 damage, no matter what other bonuses you may have. But due to the way the game engine worked, some bonuses multiplied the base damage: damage-type bonuses (such as “Fire Damage +5%” equipment) and damage-type vulnerabilities (such as when monsters are inherently weak to fire).

Since we were fixing damage-type calculations, this seemed the best time to also fix the base-damage calculations. Now, Base Damage Multipliers will no longer get multiplied by anything else. (Theoretically — bugs are always possible! Did we mention that you should report any bugs you see?)

There’s an upside to this change: every combat skill except Animal Handling has a treasure effect that boosts base damage for that skill. For Sword skill, this is “Sword Base Damage +26%”, for Unarmed it’s “Unarmed Base Damage +26%”, etc. These effects needed a bit of a boost, but the system change needed to happen first. Now that that’s done, these treasure effects can scale up:

We intend to use Base Damage in more interesting ways in the future.

(A note on terminology: there used to be a related concept called “Base Damage Bonuses”, which were flat bonuses such as “Sword Base Damage +5”. These bonuses would get added to damage after certain other multipliers were already applied. We removed this special case several updates ago. Those bonuses are now just regular bonuses, like “Sword Damage +5”. They get added in with all other flat bonuses first, before any multipliers. This change was made a while ago, but some treasure effects still used the old labels. We’ve cleaned up the game’s terminology to be more consistent.)

Ability Damage Formula Recap
As of now, here’s how ability damage is calculated:

This gives a general idea of how it’s supposed to work. If it seems complicated, well… it is. But it was a lot more complicated before this update!

There are literally hundreds of ways to get boosts and buffs, though, so there’s lots of space for mistakes or omissions. If you find problems, especially problems where the ability tooltip wildly disagrees with the actual damage done, please assume these are bugs and report them!

Remember to report the gear, abilities, and buffs involved, plus the monster you’re attacking — the monster is very important since it can have vulnerabilities and resistances. You can ‘attach’ an item to a bug report, which is handy, but we don’t yet have the ability to include screenshots in your in-game reports. So if you want to include a screenshot, please make an in-game report and then also e-mail the screenshot to support@projectgorgon.com, or post the screenshot to the forum. Thanks!

Fire Magic
One of Fire Magic’s core combat abilities was pretty irrelevant: Fire Bolts simply didn’t have much purpose anymore, given the availability of better area-effect attacks. After some prototyping a replacement, we ended up with … an ability that’s pretty much exactly like the Shield ability “Fire Shield”. But it’s more potent, and hey – it stacks with Fire Shield! (… which also received some improvements in this update. See below.)

Druid
Healing Sanctuary, intended to be one of the most potent tools in the druid’s arsenal, was finnicky and annoying to use. And due to technological limitations of pet-buffing — which have since been fixed — the treasure effects were mostly kinda dumb. So:

Quest-Item Fixes
“Quest Items” are items that are only needed for a certain quest. (Their icons have a thin red border.) If a special monster drops one of these items, each player that can loot the monster is supposed to be able to pick up their own copy of the quest item — or, if the monster only has a chance to drop the quest item, each player has their own separate chance. A few monsters didn’t behave this way: “Mr. Squeaky”, James Eltibule, and Mudtusks. These monsters now drop quest items per-player as intended.

Spawn Precognition
There are new rituals (recipes) that allow you to detect where a newly-spawned enemy will appear a few seconds before it actually arrives. Ashk in Rahu teaches two of these rituals. The first, allowing you to see respawning monsters 3 seconds before they appear, can be learned if you’ve completed the Eye of Fate favor and have Meditation 25 or Shamanic Infusion 25.