The New Horizons update brings new quests, locations, and enemies to the game, but that’s not all. We are happy to present a new interface that will make searching for suitable activities easier and let you get the maximum reward available on a selected day. This system will replace the old directives of the Council of Gods. It will include adventures, quests from Bastions, special events, and so on. The scaling system has also been improved. Beginners and players trying to catch-up to veterans will be able to reach the desired rank faster!

To make searching for relevant activities easier, we created a new interface. It is divided into six blocks, each of them centered around a certain type of activity: 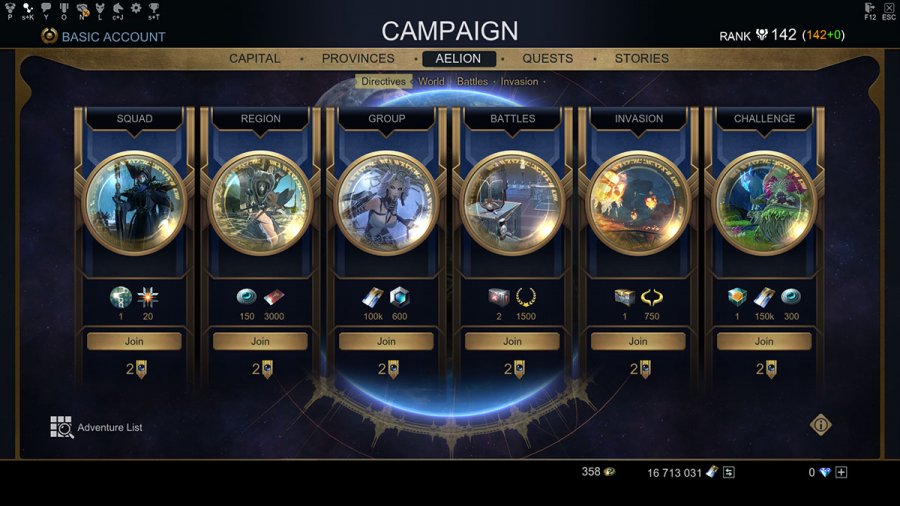 Players have two kinds of quests available – normal and special ones that provide an extra reward. Every day, each block will have one new special quest. If you missed one of them for some reason, don’t worry. These quests are accumulated over time, so you can complete them later. However, you cannot accumulate more than 7. Once you complete the quest, you will receive the appropriate reward.

After that, a normal quest will appear in its place. The reward will be smaller, but you can use Stimulants to upgrade it to “special” and receive an increased reward.

“We wanted to create a central place where a player could find relevant adventures and receive rewards needed to develop their character. Eventually we came up with an idea of six blocks, each with quests of a certain type. They include rewards for the directives of the Council of Gods (they will be moved to this new system) and Bastion development. In the future, we plan to move Flavius’s laboratory to this section. First daily quests in each block will be the same for all players – we want to encourage team play. As a result, we get a revised system of directives of the Council of Gods which includes rewards for other activities as well, but these activities are divided into separate tasks. Thanks to that, you can get rewards for each task faster.”

Aside from the above-listed changes, we also revised the mechanics of Bastions. After the update, you will see a new structure in the capital – the Stronghold – which consolidates Might provided by all Bastions. You can continue to upgrade this structure using a special currency which is given for quests from the new interface. From now on, Bastions will be used for unlocking symbols.

Of course, when you reach the next rank, you will receive an extra reward! The higher the rank, the more valuable it is.

Two more important changes will affect beginners and those who have not visited Aelion for a while. Right now it’s difficult for them to catch up, because achieving elder divinity takes a lot of time and effort. To amend that and help them reach the current content faster, we decided to make adjustments to divine specializations and scaling system.

First, let’s talk about divine specializations and the Temple of Deeds. Right now, all bonuses are sorted into seven halls: aside from the Hall of Travels that requires Victor’s Medals, there are six more, and you need Avatar Trophies to unlock them. We decided to simplify this system to shorten the road to higher divinity.

The New Horizons update reduces the number of divine specializations to 4. One of them is God of Travels. They all become part of the Temple of Deeds. The Junior God tab will be removed. Its nodes will be distributed among the new specializations.

Specializations are available as soon as you unlock your divine form, but the list of bonuses has changed: some are boosted or combined, and the rest are removed.

You still need Avatar Trophies to improve specializations, but they are used not to unlock a branch, but to develop it. Two nodes in each specialization will require Divine Deeds and one Avatar Trophy (per node). At this stage, changes will not affect the aspects of elder gods.

Current bonuses in the Hall of Travels will be improved, and new bonuses will be added. Some of them used to be in other halls (like “Inevitability” from the Hall of Hunt).

Second change is related to the scaling system. After the update, it will not just increase the Might of a player who’s lagging behind, it will also provide bonuses from the laboratory and divine specializations specified for the selected rank of the adventure.

Of course, it doesn’t grant all bonuses, just the ones that directly affect damage, health, and defense. New abilities, bonuses that affect Faith cost or cooldown of abilities are not provided.

As a result, new and returning players will be better equipped to handle the new content that becomes available after the campaign. Improved scaling will make the game more accessible to players trying to catch up, but of course, it will not exempt you from having to learn your class and how to play it.

For example, in the range from 69 to 81 you can access the Blood Magic bonus which increases damage by 20% when you are affected by God’s Might, or the God’s Wrath bonus which increases the character’s damage to monsters by 100%. In addition to previous bonuses, in the range from 82 to 91 you will gain access to new adventures appropriate to your rank.

You will also get bonuses from Flavius’s laboratory. Their number depends on an adventure’s rank. Bonuses are provided by the laboratories of all armies at once, but they take server events into account. For example, if there hasn’t been a demonic invasion in the server or it is currently in progress, the scaling system will not provide bonuses from that laboratory. They will appear as soon as the demonic invasion is over.

You should also remember that the scaling system does not apply to all activities. It will help you complete adventures at the Warm-Up difficulty and participate in invasions, but it will not work in distortions, against an invasion avatar, in Groups and Parties at the current difficulty. To handle these activities, you will need to get to the relevant rank by improving your structures in the capital and collecting quality equipment.

We hope these changes will be beneficial even to experienced players – after the update, beginners will be able to provide full support during adventures, so their contribution will be more noticeable.

Soon you will see these changes in game! We hope they make the game more comfortable and accessible for everyone!