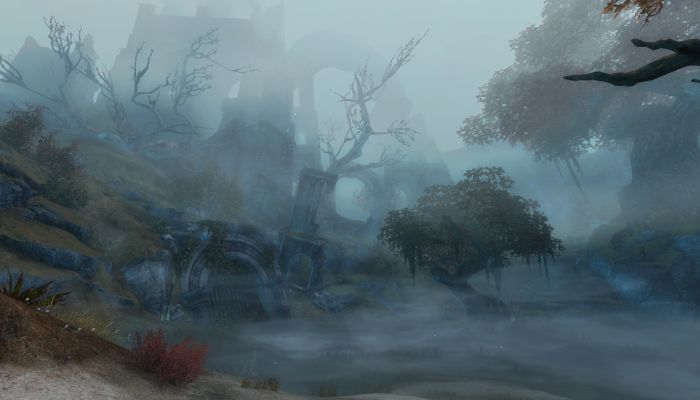 Guild Wars 2 his always a growing pains over the last seven years. We’ve seen the first stumbled steps of the Living World franchise and two expansions, to varying degrees of success. This year game director Mike Z stepped out on stage at Pax West to announce the latest major update to ArenaNet’s premier MMORPG.

Unveiling the Icebrood Saga and the upcoming continuation of our Commander’s fate is undoubtedly a major milestone in the Guild Wars 2 story. This brand new saga, as it is called, will take players and back to the Northern areas of Tyria, reconnecting them with the Norn and Charr races. It’s a fantastic idea to go back to the roots of what captured our imagination when we first started playing Guild Wars 2 and reconnect with the races that we’ve rarely seen since the game began. However, the manner of that announcement seems to have been most unusual.

For fans of the Guild Wars 2 franchise, finding out that there is no upcoming expansion and a continuation of the Living World seasons is no great mystery. As far back as 2017 we sat down and talked to ArenaNet about the Living World season and their decision to step away from expansions. The hype that led up to the Pax procession was followed by mostly a simple confirmation of things we already knew.

On wandering into work this morning and talking to some fellow gamers that do not follow Guild Wars 2, the result of the Pax West presentation seems to have been nothing. They did not know Guild Wars 2 had a new season coming. They even questioned why the game didn’t have a new expansion. After a week of mulling this over the presentation seems to have missed much of either audience. 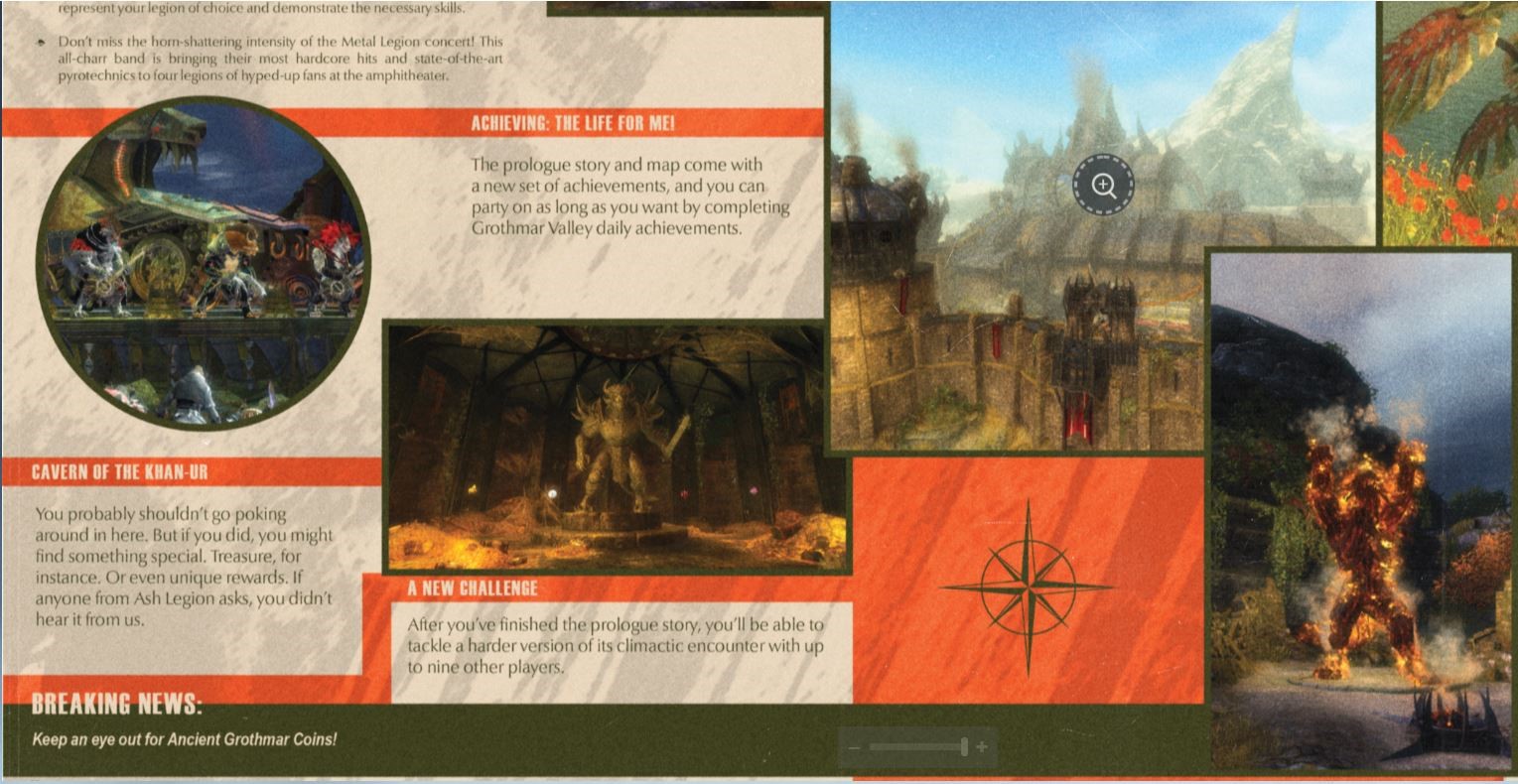 Somehow, however, ArenaNet managed to blow me away with a subdued introduction to the new Saga yesterday with a post on their website and a digital magazine. With the same loving reverence that Super Adventure Box has for the game’s lore, ArenaNet published their own online articles covering the history of Tyria, where we are about to go, and what we might see. This all followed the forms of the Pax stage show but with a loving attention to detail that we didn’t get at Pax. Thanks to the Icebrood Saga publication, we now know that the upcoming prologue to the new Living World adventure will take players to the Grothmar Valley, home of the Blood Legion.

Within this, there seem to be a number of new activities to take part in including

Other additions to the environment will include an actual Charr Metal band, because why not. Grothmar Coins appear to be the newest zone-wide currency to enter the player purse and.

On a more serious note, the magazine brings up some important information on the future of the Charr race. While we might have been thinking that the Norn was going to be the focus of the story and their obvious conflict with the Son’s of Svanir, the Flame Legion is about to make an appearance.

The Doomlore Shire is mentioned between the pages of this printed update. For those that aren’t aware, this refers to a place of incredible importance to the flame worshiping Charr of old.

This dark shrine radiates heat and magic, a testament to ancient days of Charr domination and worship to their former gods, the Titans.

An additional mention of a sacred flame seems to link back to this worship of the titans, the ancient Charr shaman’s own sacred flame, the Flame Legion, and maybe even the Titans. This is itself a great deal more information than we were given on the Living World’s upcoming content through the Pax presentation and I’m glad we got it. 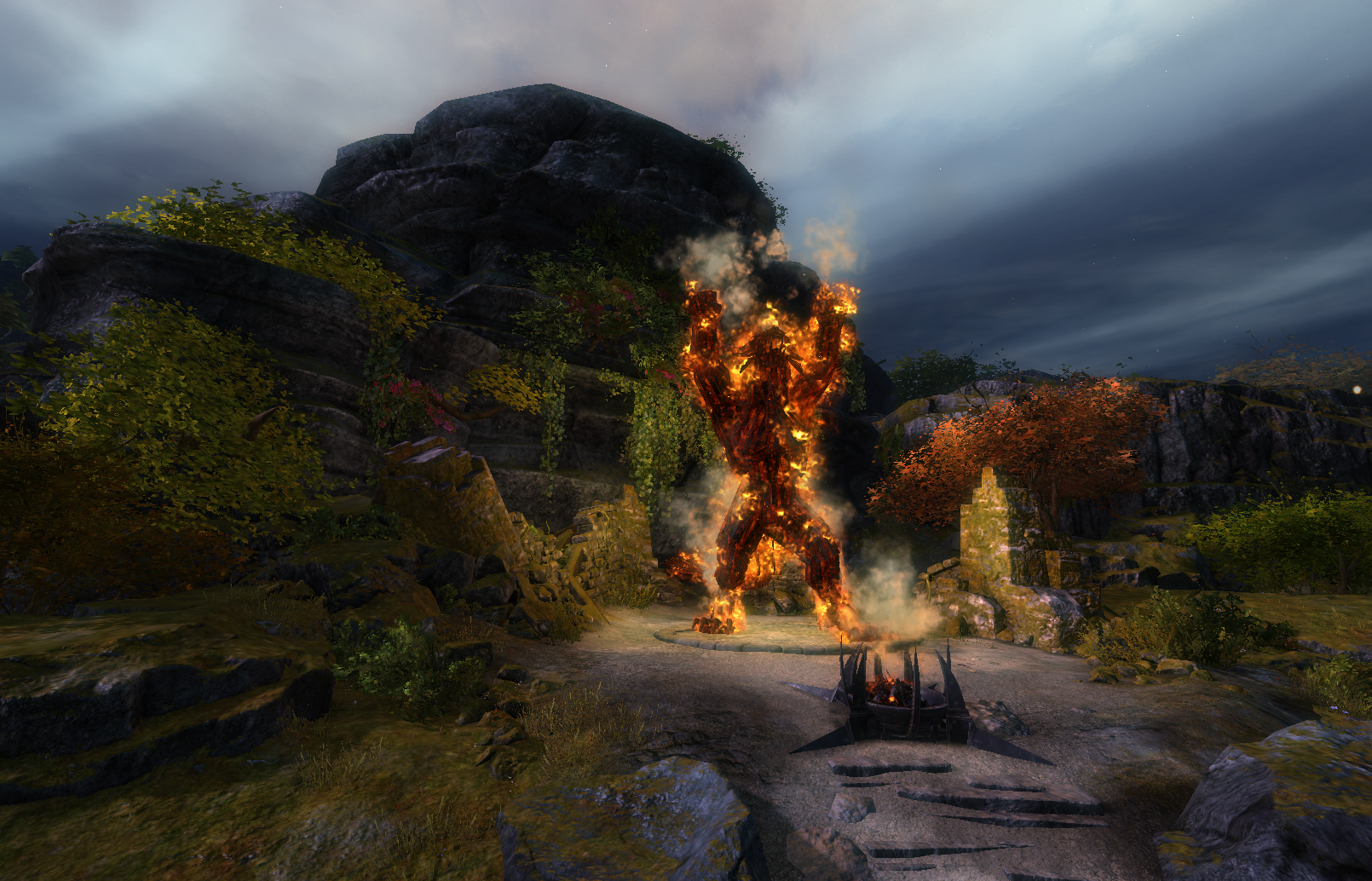 While I feel that ArenaNet might have misstepped on pushing the word out to brand new players, the new Living World magazine tickled me as a long term player. It shows a reverence for the game and provided players with the ability to uncover the upcoming content for themselves. It has already started some speculation and allowed those of us who dislike the idea of sitting through advertisements to skip updates on the latest apparel and skim forward. For a medium that is apparently dead, the new season of Living World hasn’t felt more alive than on these pages.

While We wait on the upcoming Guild Wars 2 Saga, let me drop one more thing form the Magazine here. I don’t know if it’s connected to the return of the Flame Legion and the Titans of old, but the fact it has me guessing is more than the Pax show managed.

What did you think of this year’s Pax announcement? Was it enough just to whet your appetite or, like me, did it take the quirky aside of the Living World magazine to really engage you? If you haven’t read it yet get over to the Guild Wars 2 website and read all about it, and check out some awesome shipping.