The Season of the Dragon saga reaches its epic conclusion with Dragonhold, The Elder Scrolls Online’s latest DLC story zone. Learn about this new adventure and all the changes coming with Update 24 in this preview article!

The Dragonhold DLC game pack provides a new zone to explore, a new main questline to complete, new mechanics and challenges to experience, and more. Update 24 is a free game update that arrives alongside the DLC and includes the first wave of our announced performance improvements, Twitch Drops for consoles, and additional fixes and balance changes.

A LAND IN RUINS

The ancient Khajiiti kingdom known as Pellitine lies in shambles. Devastated by a terrible plague and its purging fire decades ago, Southern Elsweyr devolved into a lawless region beset by slavers, pirates, and brigands. As refugees from the surrounding land slowly make their way to the zone’s capital of Senchal, the city’s few remaining defenders muster for their last stand against the chaos.

However, worse things threaten the people of Pellitine. The Dragons, free from the Halls of Colossus, have brought their rage south. Bolstered by a cult of worshipers known as the Order of the New Moon, they devastate the region and continue their secret schemes. 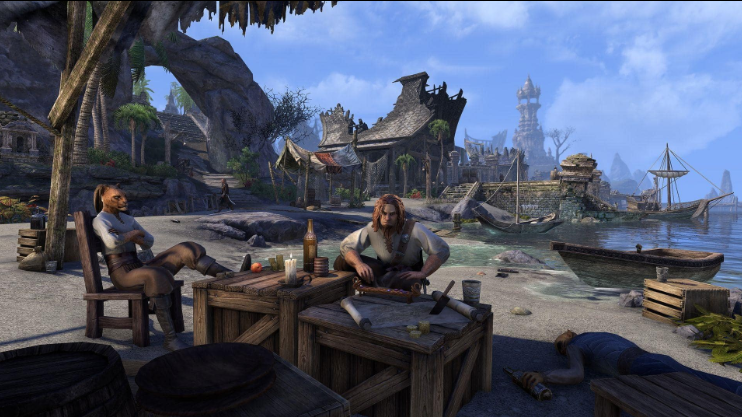 All manner of rogues thrive in the ruined kingdom

These challenges and more await those willing to venture into the scorched confines of Southern Elsweyr. Consisting of three unique biomes (including scorched-but-recovering wilds, old-growth forests, and tropical grasslands) and packed with new delves, world bosses, quests, and Dragon hunts, this new zone contains plenty to keep you engaged.

The odds are stacked against you, but rest assured, the benefits gained by exploring Southern Elsweyr make it all worth it. The Dragonhold DLC boasts more rewards than any previous DLC story zone, including new titles (such as the much-requested “Pirate” title), tons of new collectibles (including a mix of costumes, mementos, and outfit styles), item sets, and more. Pellitine might be in ruins, but untold riches await those who know where to look!

In the Dragonhold main questline, you work with fan-favorite character Sai Sahan (returning for this storyline) to gather a rag-tag group of pirates and adventurers and restore the ancient order known as the Dragonguard. Once thought lost to history, this ancient organization of Dragon hunters must return to aid the Khajiit of Elsweyr against the Dragon threat. 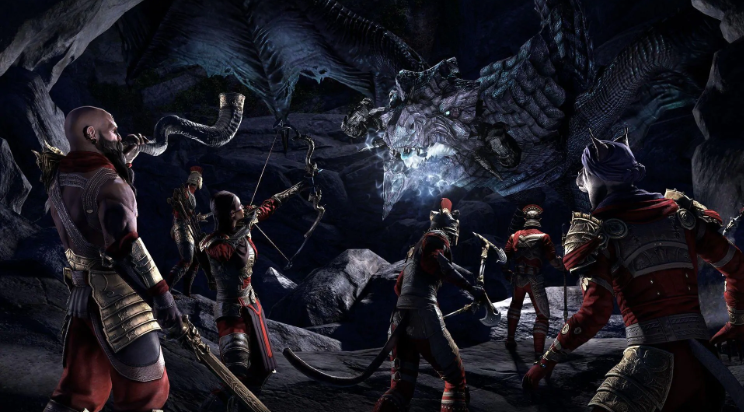 Face the Dragon threat with new and returning allies

The Redguard swordmaster is not your only companion in this endeavor, however. When you start the zone’s main story, a powerful and famous ally from Elder Scrolls lore joins you. No spoilers, sorry! Together, you and your new allies must seek out the secrets of the lost Dragonguard order and fight against the machinations of the mighty Dragon Laatvulon and his New Moon cultists.

THE SEASON OF THE DRAGON FINALE

Dragonhold also brings the year-long Season of the Dragon saga to its epic conclusion. Starting with the Wrathstone DLC and continuing with the Elsweyr Chapter and Scalebreaker DLC, the story that began at the start of the year reaches its climax in this final 2019 DLC.

In addition to its typical main-story quest content, Dragonhold features bonus quests that let you and your allies put an end to the machinations of the Dragon Kaalgrontiid (from the Elsweyr Chapter main story). You delayed the terrible Dragon’s plans in Elsweyr. Now, in Southern Elsweyr, his schemes must be stopped for good before he can gain the power of the gods! 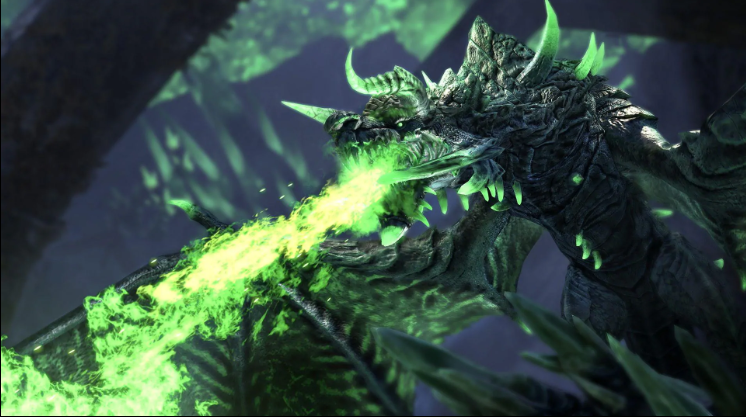 To unlock the Season of the Dragon finale quests, you must complete both the Elsweyr and Dragonhold main story questlines. You don’t have to complete the stories from this year’s two Dungeon DLCs, but you should if you want to see the whole picture!

In addition to the new DLC game pack, we are also launching a massive base-game patch, free to all players, that features the first wave of the previously announced performance improvements. This first batch of changes includes a memory management overhaul, the first phase of combat ability performance improvements, and a complete redesign of the Looking for Group system.

These changes will reduce the amount of crashes/dashboarding, improve combat responsiveness, and improve the reliability and speed of the Group Finder. We know that the ESO community has long requested a performance update, so we are thrilled to launch the first part of what will be a massive, year-long series of improvements with Update 24!

Update 24 also features the introduction of Twitch Drops for console players, allowing you to earn Twitch Drops for your Xbox One or PlayStation®4 account simply by watching Drop-enabled ESO streams! Note that while this addition is scheduled for Q4 2019, it might not be immediately available upon U24 console launch, so stay tuned for announcements in the future!

Soon, PlayStation®4 and Xbox One players will be able to receive Twitch Drops!

YOUR ADVENTURE ENDS … FOR NOW!

With Dragonhold and Update 24, your incredible year-long adventure reaches its exciting conclusion with an incredible new zone, story, and a host of improvements that’ll keep ESO going strong for years to come! It’s time to travel to the scorched lands of Southern Elsweyr, reforge the ancient order of Dragon hunters, and bring hope back to the people of Pellitine. Keep an eye on elderscrollsonline.com and our social channels for more information on the DLC and your chance to check it all out early when it comes to the Public Test Server on Monday, September 16!

Bringing the year-long Season of the Dragon adventure to its stunning conclusion, the Dragonhold DLC game pack is coming soon to PC/Mac, PlayStation®4, and Xbox One. It will be available in the in-game Crown Store or free as part of an ESO Plus™ membership. Included with the new DLC will be Update 24, a free base-game update for all ESO players.