Guild Wars 2 is back with a brand new prologue to Season 5 of ArenaNet’s epic ongoing story. Before the release of Bound By Blood, we got hands-on and rocked out with the Charr.

The Icebrood Saga is almost upon us. Bound By Blood isn’t quite the start of this epic journey, but more of a preparation for the player. This new beginning offers fans of ArenaNet’s MMORPG a moment to party before the real war for the North begins. Follow us as we take a tour of the newest addition to Guild Wars 2’s Living World with Bound By Blood and find out if it is all a piece of party cake.

Throughout the Living World, we’ve seen stories that center on the Asura, an entire expansion that put the spot lamp on the Sylvari, and a whole bunch of political warfare in the Human court. This season Guild Wars 2 will likely take a more definitive look at the Norn and Charr, two races that many of us fell in love with when Guild Wars 2 launched and were largely represented by a flaming sword and a grumpy teenager for years. It’s a wonderful change of pace to find these two races at the forefront of things as we receive an invite from Imperator Ruinbringer to visit the home of the Blood Legion. 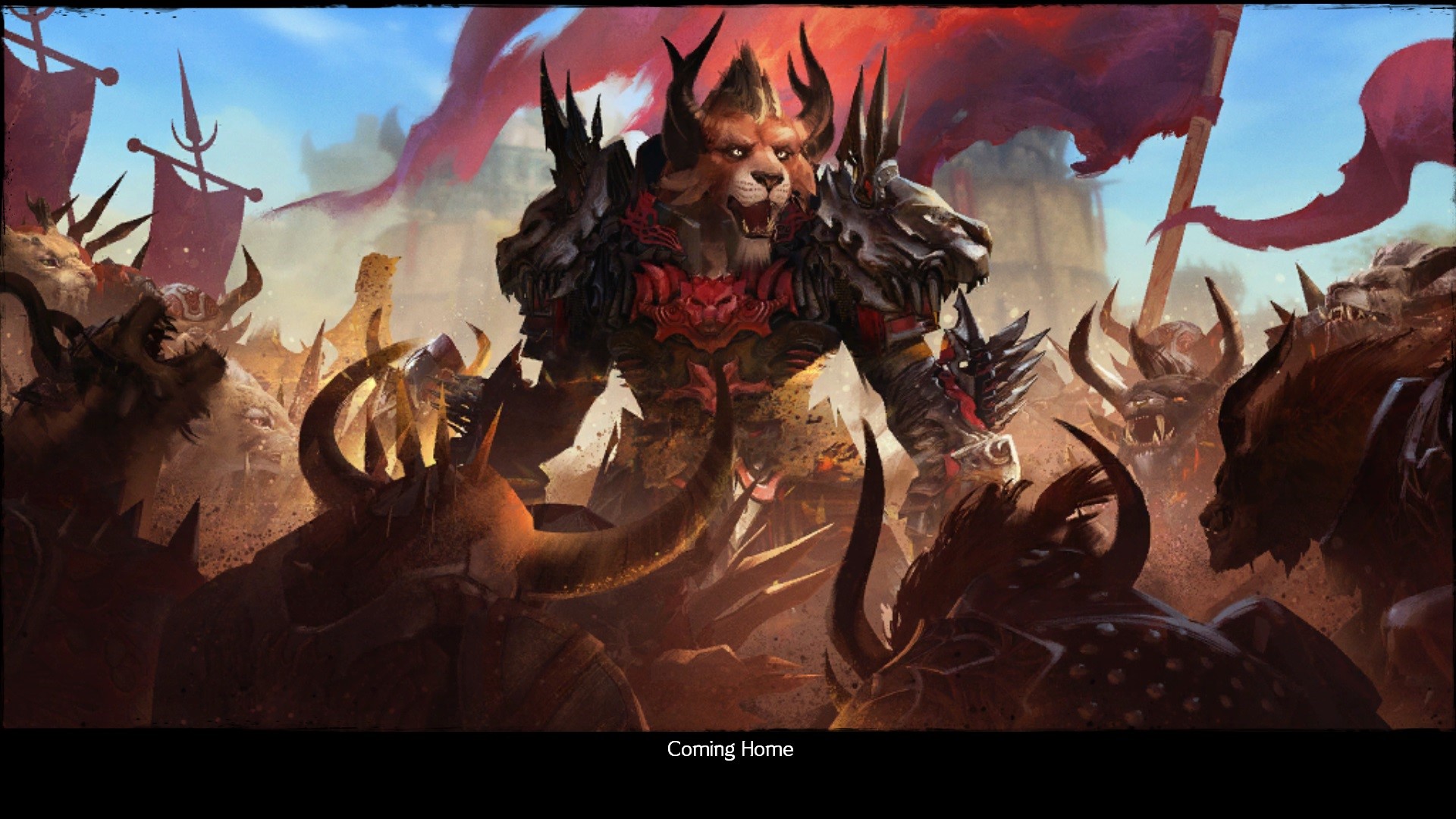 With the looming threats that are due to descend from the North, the forces that once called those wilds home will face the next test of skill and endurance head-on. First, they will need to band together. Beginning in a Blood Legion fortress, players find a summit of Charr bristling with anticipation. While there couldn’t be more fur in an oversized cattery, this is a mementous day for the Charr. A race that is competitive at best and divided amongst themselves aren’t just here to party but to try and stand together. Things aren’t as binary as that however and it is worth sniffing around when you can. Under the alcohol and explosions, there is more to this meeting than you might imagine. The party preparations, however, appear to be paying off and players begin Bound by Blood by jumping headlong into the festivities that surround.

Grothmar Valley is a rough neck of the woods despite the ongoing celebrations. The Charr-ed plains of Ashford make something of a reappearance here as players begin meandering through Blood Keep. The typically Charr mix of wrought iron tanks, gunpowder, and the clash of swords makes way for Asuran announcers, fireworks, and bunting as the Blood Legion stronghold sets the scene for much of this episode’s new events. While we’re going to avoid the story elements, there’s plenty of other things to do in this brand new map. Things aren’t just golden grass and dusty roads either. Gorgeous fields of color make an appearance and crystalline deposits seem to encroach upon the natural undulations of the map. While some areas of the Living World, like Thunderhead Keep and its surroundings, build one a single idea, Grothmor Valley is a great mix of terrain that allows players to explore in a variety of ways. Take a Charr Car out on the road and you’ll see what I mean.

Thankfully, you can. Located somewhere in the Festival Promenade in the center of this map is the first of four entertaining events. A Demolition Derby is one of four events that cycle through the entire map. Unlike a more structured meta, these entertaining asides are all inventive new ideas that you probably won’t have seen before from ArenaNet. Drop into the and players can crush some skulls in team-based, turbo injected warfare. Grab a Charr car, pick a legion and try to blow up as many opposing Legion members as possible, in a Tyrian Twisted Metal. While other players are not strictly required to trigger this event, it is even more fun unleashing rockets, a burst of speed, smokescreens, a pounce attack, and an incendiary rocket barrage on your friends or guildmates. 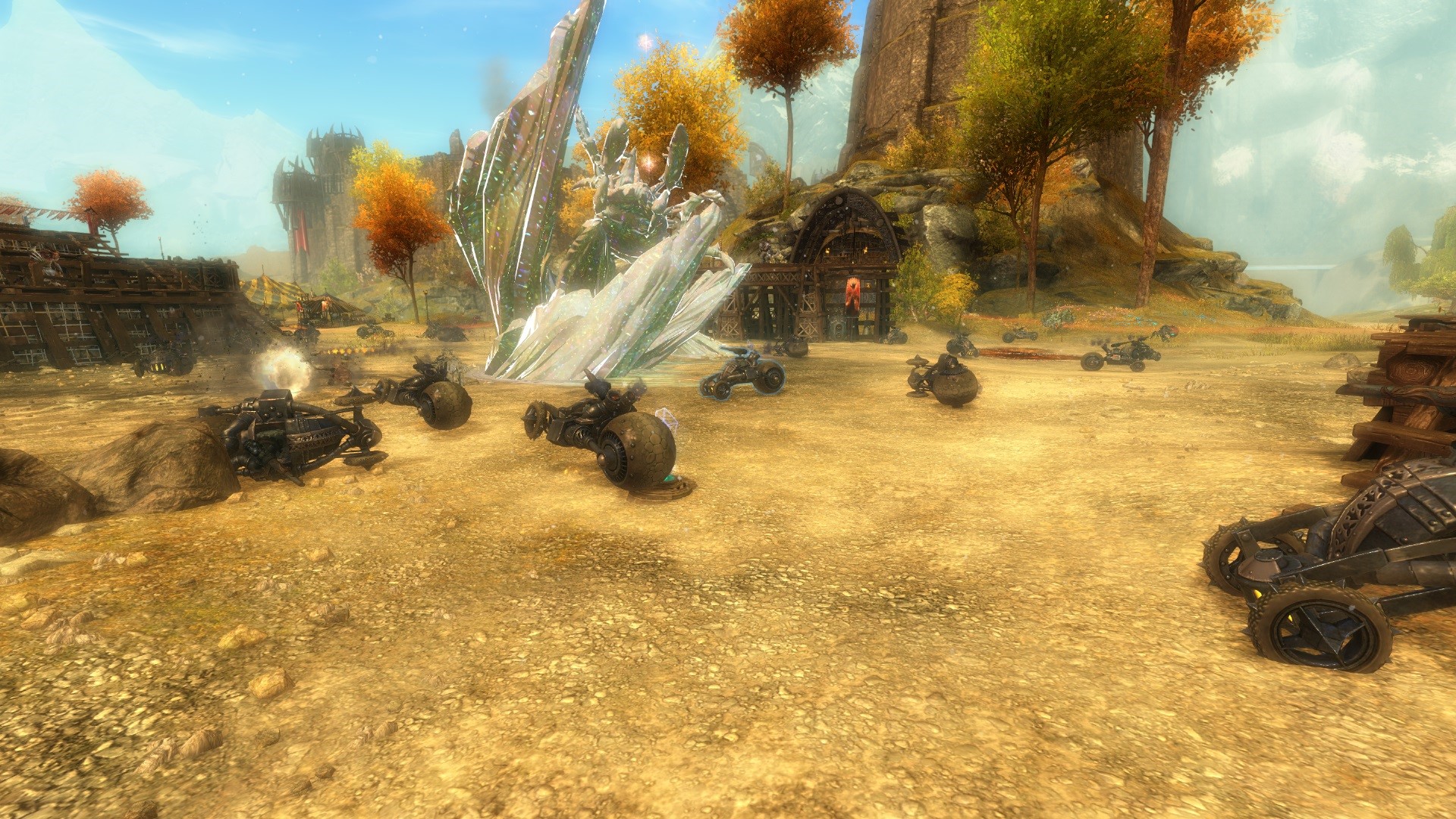 Combat performance is just as important on two paws as it is behind the wheel for Charr. So, it makes sense that a shooting range crops up in the same cycle of events. I’ve experienced shooting years ago, but target practice is something different here. Placing players on a levitating platform, this event propels players through the sky and turns Guild Wars into something of an FPS game. Floating targets are spawned independently for each player participating and the best score wins, of course. 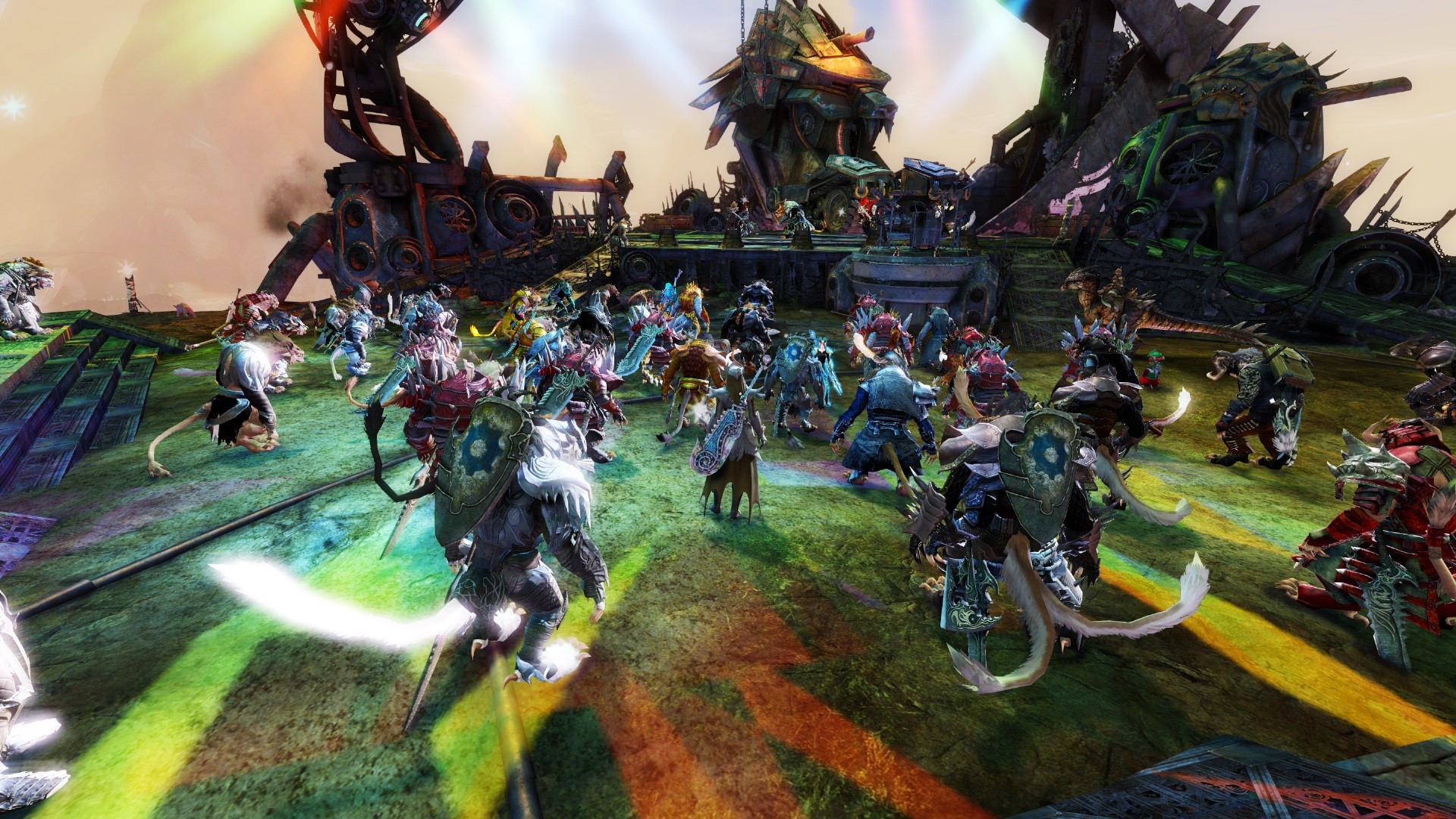 If you caught the recent magazine dropped by Arenanet then you might think that the idea of a Metal Legion might be a bit of tongue in cheek. It wasn’t. The last of the event’s that I got an opportunity to see play out was an actual Charr rock concert. As ridiculous as it sounds, it works tremendously. The Char legions have a mosh pit for the ages and the ArenaNet audio teams clearly had a field day here. \regular shows kick-off, headed by the Metal Legion band and supported by an irritable Asuran roadie. With such short hands, there are plenty of things that could interrupt this most metal of performances and they do. Sparks spawn, the mosh pit needs filling, and you’ll need to wave your metal claws in the air as a variety of mini-tasks pop-= up. Rather than a standard contribution bar, a Rock Band style hype meter fluctuates as players complete the assigned tasks. Keep the hype going and the band plays on.

This all sounds a little unusual because it is. It is clear that this map is a mix of well done old ideas and experimentation. You’ll notice that this new episode has a lack of renowned hearts. Even events like the Strike Team expedition out towards the Shinverpeaks and a mount race, are bound to a particular start location, are still more akin to newer event-style activities than standard fetch and carry quests. The design team focused on running events in the map, allowing players to more naturally explore and participate in the world rather than provide a tick box full of completionist awards. To supplement this, you’ll still find a wave of achievements to give players a hard mode to try for.

Rewards are, again, something of experimentation. While you’ll still be able to grab weapons and some armor, the team behind these items have deviated from the norm somewhat. Highlights include an awesome Charr exclusive helm, a brand new rock out emote, a brilliant set of Charr inspired weapons, and a war horn microphone.

We’ve already seen a bunch of awesome weapons come out of the Living World updates and this one might be my favorite. This fun mic contains an audio addition that allows players to scream down the mic in a character appropriate voice. It’s fun, and that’s the thing that strikes you about most when roaming through the map. While the story that plays out among Charr is fraught with politics, the map is a great moment to relax before things get serious. I’m not going to spoil the story for fans of the franchise but putting a bunch of Charr in one place is not ever going to go down easy. This warrior race is busy trying to find a direction as the world changes drastically around it, their enemy is slain and that means something for Tyria, but you’ll have to play and find out if it is good. The Icebrood Saga Prologue is out now for Guild Wars 2. Players can log in and play for free. If you are new to Tyria or want to find out more check out the official website.