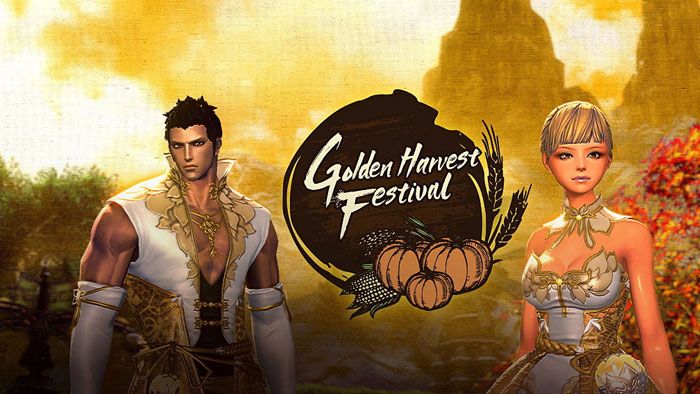 Prepare yourself to celebrate Autumn festivities; the Golden Harvest Festival is on its way!

It’s the season where the air turns a bit brisker, trees don brilliant colors, and friends gather round to celebrate a fruitful harvest with a massive feast. To celebrate, the annual Golden Harvest Festival returns to the Earthen Realm with a cornucopia of fun on November 13!

During the Golden Harvest Festival, earn Harvest Dinners to purchase unique rewards during the event. First, if you log in each day, you’ll be able to earn one free Harvest Dinner (or three if you’re a Premium Member,) through your Login Rewards.

You can then complete the following dynamic quests to receive additional Harvest Dinners:

Even more Harvest Dinners can be found in the Festive Feast Bag, obtainable by defeating Mushin’s Darkness on Floor 8 of Mushin’s Tower, but be sure to come prepared, since floors 1–8 of Mushin’s Tower have been re-balanced to match current content difficulty—more details to come with the Patch Notes which will be published the day before the Golden Harvest Festival update goes live.

The Roast Turkey, Strawberry Shortcake, and Homemade Cookie are time-limited buffs that can be used in the following Raids: Skybreak Spire, Temple of Eluvium, Scion’s Keep, Scarlet Conservatory, Emperor’s Tomb, and the Throne of Oblivion.

The Festive Feast Bag requires a Harvest Key to open which can be acquired from the following daily quests:

The following rewards can be purchased from the Dragon Express with Harvest Dinners:

*The Golden Nebula Stone can be used to reduce the cost of upgrading Talismans up to True Thunder.

During the festival, you can also earn 2x the rewards when you defeat Koldrak and complete “The Dragon’s Lair” daily quest.  Take advantage of this limited opportunity to double up on these rewards!

Hongsil’s back and decided to start up a special game called Treasure Draw! Using keys acquired from the Hongmoon Store you’ll select numbers on a game board to see if you found the big prizes hidden on the board. Every number is a prize, so you’ll always win.  Stay tuned for details this week on how to play Hongsil’s Treasure Draw!