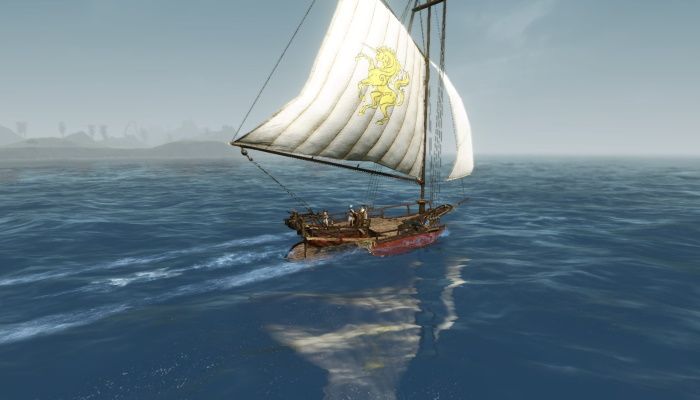 There are two things that make me a little different from the assumptions behind those other guides.  For one, despite enjoying MMOs and even being in guilds, I tend to play a little anti-socially.   I like to have the community there around me, but I’m really a loner at heart and spend most of my time in game quietly doing my own thing.  Power-leveling with friends in extra hard zones isn’t likely to happen because I just don’t play that way very often.

It’s just not that interesting of a path for me and I’d rather do something more entertaining when I play games.  It sounds a bit cheesy, but I enjoy the process getting there more than the end result.  The high-level PvP and other endgame content can be fun, but I always enjoy building a character and the leveling experience more.   I’m that guy that’ll restart with multiple characters before ever finishing an RPG or restart in the mid-game of a long 4X, all just because I enjoy the early game more.

Since much of the same concept goes along with making money and leveling in games like ArcheAge: Unchained, I thought it might make for a good article.  Today, I’m going to talk about the strategy that I used when leveling my character, which I think went pretty well.   I’ll also get a bit into the economics and how I’m going about making my modest way through the game.

When I say that I prefer the process, that’s not to say that I’m that guy that stops to read all the flavor text and roleplay through every side-quest while making my way towards max level.  I’ll often spam my way through conversations for the random flavor events placed around the digital world.   I’ll occasionally read through them, but they’re rarely as interesting as the main quest line.

That’s not my only reason for avoiding the mob-grind many of my fellow guildies will employ to maximize their leveling in as little time possible, though.  More important than my own preferences is just the fact that I work a lot.  That makes it hard to be around when everyone else is leveling, and I have interruptions even when I am around.   It’s common for me to get a phone call and have to pop AFK for a few minutes.  Sometimes those calls can go a while, and it’s not fair to short-change everyone else a party member like that.

Thus, I tend to take the slower solo path towards leveling.  In ArcheAge: Unchained that method seemed to work pretty well.  It’s not always possible, especially with some of the more difficult games that I tend to like a little more.   Also, some games like World of Warcraft seem to be ridiculously easy, as if there’s no point to leveling at all and the game exists solely for the endgame. 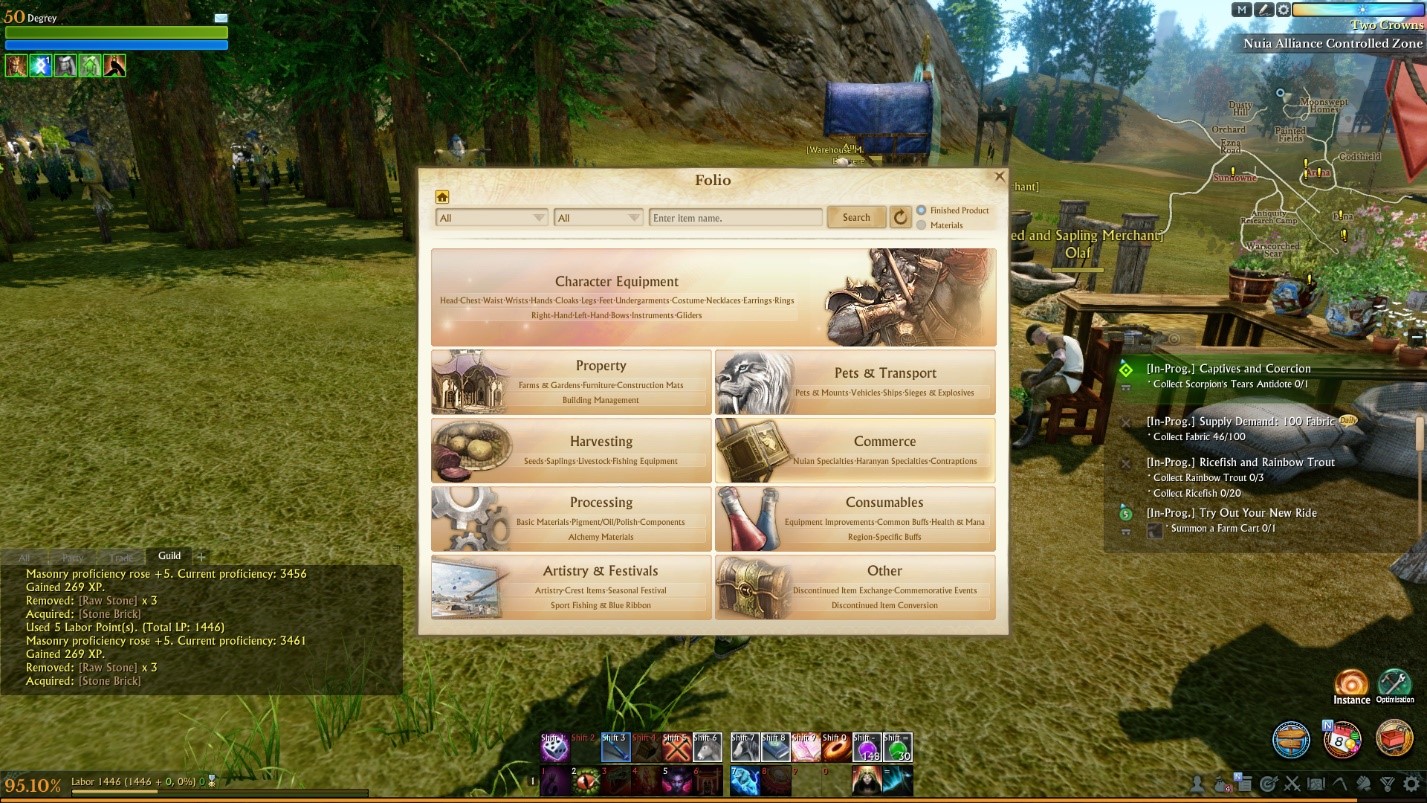 The “O” key is amazing.  Ingredient lists for everything you could make, including packs, allows you to plan everything out ahead of time.

AA:UC seemed to play pretty well with that style, though.  For the most part, I just followed the main storyline.   The difference is that I took time to complete all the quests in each zone before moving forward.  My guildmates did that to a point, but they jumped to Auroria at level 45 and leveled by grinding mobs.  It was fast, but it involved pulling and grinding ad nauseum.

In my case, I stuck with the main storyline, eventually popping over to the opposing continent and working through those quests.   Even though I was in hostile territory, I still continued the tradition of completing all the quests.   I found that the experience came at a steady rate, and so did the cash.  I’m sure I’d make more from killing higher-level mobs on the northern continent, but regular chunks of cash and 3-4k experience for completing each quest smoothed that procurement curve out a bit.

In the end, I kept up with the others in my guild and it only took me and extra day, maybe day and a half to get to level 50 than it did them on average.  It was a more relaxed push for me, though.  I also had a number of interruptions but being about equal or slightly higher level than the mobs I was fighting allowed me to disengage and find a safe spot to AFK every time the phone rang.

The game is clearly been tailored around this leveling method, so it’s pretty obvious that it’s a viable strategy.   I think it gets lost in the sea of all the other power-leveling guides, though.  Folks get sucked into this idea that they need to do all these special things to level efficiently, and I suspect that often ends up being counterproductive.  The added risks mean more deaths, which result in lost xp or more downtime recovering from a close fight.  I figured it might not hurt to remind folks that slower, but steadier, is also an option.

I both love and hate the economics of ArcheAge: Unchained.  Sometime since when I played it last, they’ve changed the way the trade packs work and I hate the new system.   It makes absolutely no sense to me why they would have changed it.  I’ve heard that it was to encourage PvP, but since packs are turned in to vendors in peaceful zones, that doesn’t really ring true to me.   Even with the old system, the most lucrative packs came from PvP zones.  Whatever it was, it’s frustrating. 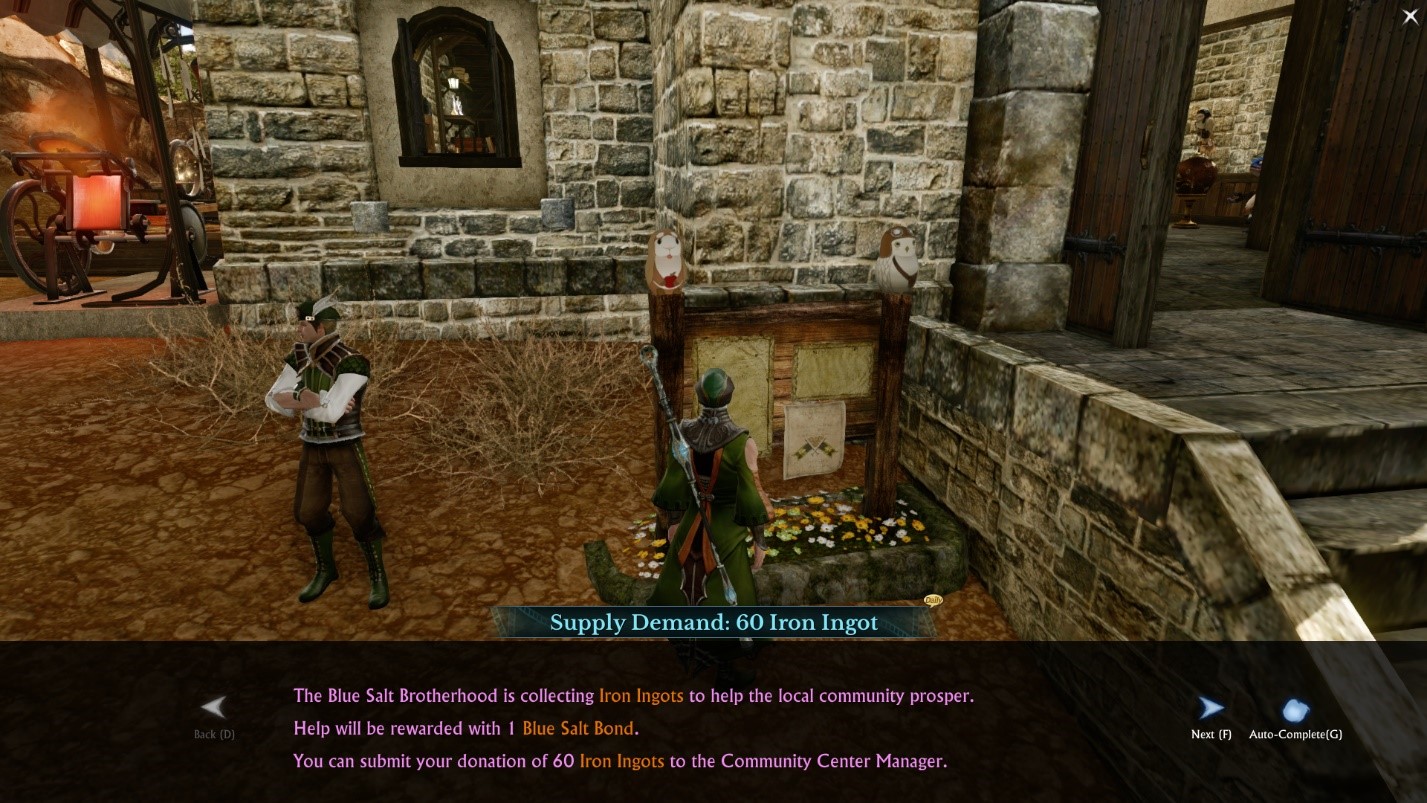 Stone is needed for my house and Blue Salt quests, which means you also get a lot of iron (which I use very little of) and that iron is rapidly turned into gold, experience, and bonds.

This is another area where there are a ton of videos talking about making gobs of money running specific packs and dedicating yourself to a hyper-focused economic stovepipe.  My issues with that are that it doesn’t support your guild as well, it’s boring, and it’s not entirely feasible unless you assume a lot of other things (such as being power leveled and accumulating a lot of free capital to begin with).  A lot of these guides also assume you’ve power-leveled your proficiencies.

That’s boring and expensive, and not really my sort of thing.  In my case, I’ve decided to do cooking to support my guild.  Obviously, I need to grow a lot of grain to work on leveling that, but grain is also used in trade packs.  That defines a lot of the trade packs I’ll be focusing on to run, but I also combine them with a few other things.

For one, a great way to make money is the Blue Salt Brotherhood quests you can pick up at community centers.   They give you experience, cash, and Blue Salt Bonds.   Those bonds can be used for a few things, including upgrading your community center to provide additional benefits to the area you have property in.  I’d like to see those benefits expanded a bit and made more tangible, but it’s a nice side-perk as it is.

The true value is in the XP and cash you get for turning in these quests, and they’re all pretty much versions of the same thing.  They want cloth, stone, timber, leather, or iron.  There are sure to be others I haven’t seen yet, but those are the main ones.   Those are also the reasons you visit the community center in each region regularly.  Hitting “G” when you’re close to the resident board will also tell you the other regions desiring some amount of the same resource, so check it when you pick up the quest. 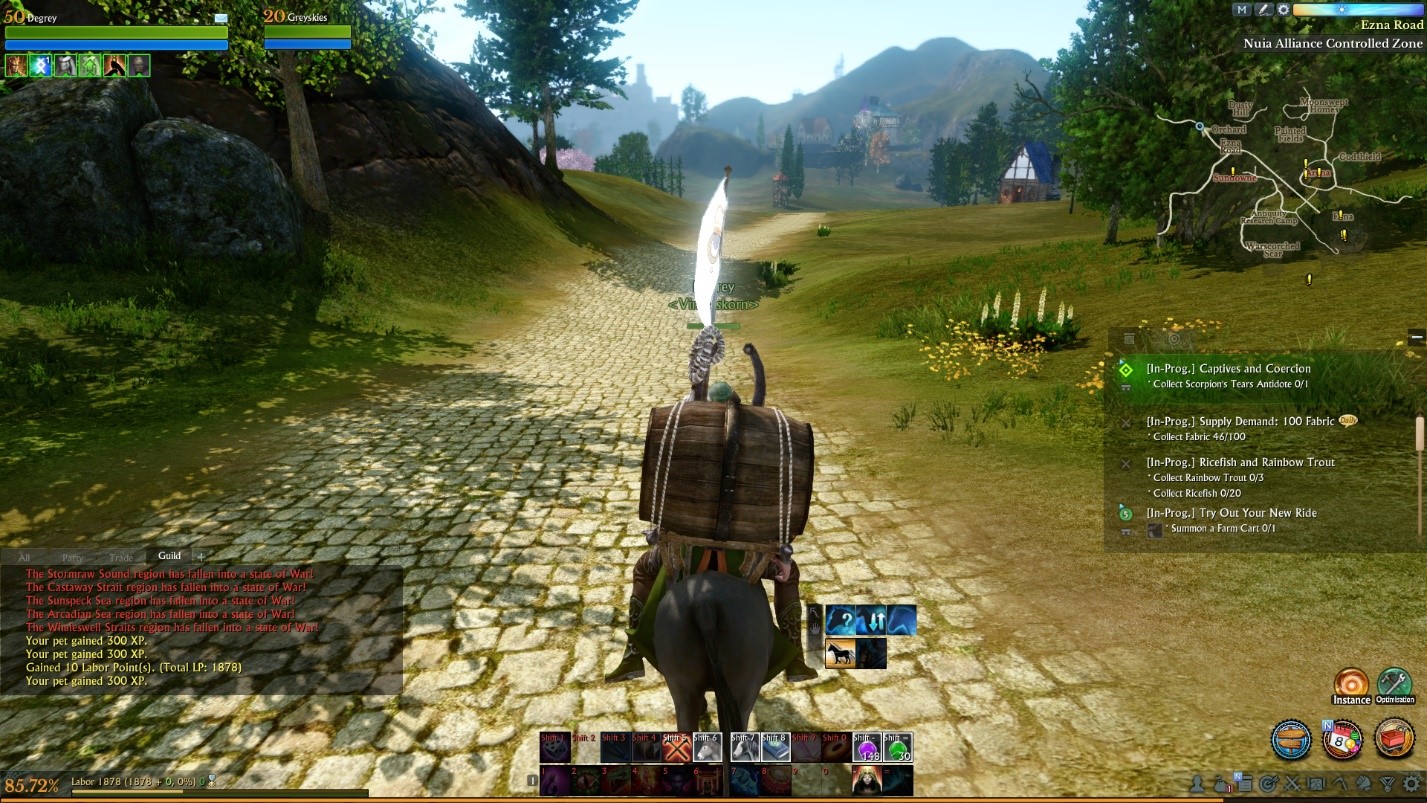 Basing out of Two Crowns means I do get less for packs, but it’s free money when it’s a return trip from doing a handful of Blue Salt Brotherhood daily quests.

In my case, I skip all the lumber ones because lumber is extremely valuable on the server right now.  I started focusing on the ones that want cotton because that helps me raise my farming skill.  Granted, I split off some labor towards tailoring, but that’s not a problem right now.  If I get to the point where I really need the labor, I’ll post on the request board to have cotton converted to fabric by an aspiring tailor.   I’m sure they’ll be tickled to get the skill and a little gold out of the exchange, and I’ll still come out ahead thanks to the reward from the quest.

Combined with the other daily Blue Salt Brotherhood quests to do things like dropping flowers off in certain roads, raise mounts, and collect faulty gunpowder, you can have a daily run that nets a fair number of gilda stars, bonds, experience, and cash.  Pick up a pack as you wrap up and get ready to head back and you increase your profits by a fair margin.

Can you make more or level faster by grinding away at the digital hamster wheel?  Sure.  That’s crazy boring, though.  Repetitive cargo hauling and farming higher level mobs will definitely get you ahead of the crowd, but that’s not really what I call fun.  Instead, I think you can still be ahead of the general curve by looking for daily quests that align with where you plan to play anyway, or by doing a good run of Blue Salt Dailies each day you get a chance to get on. 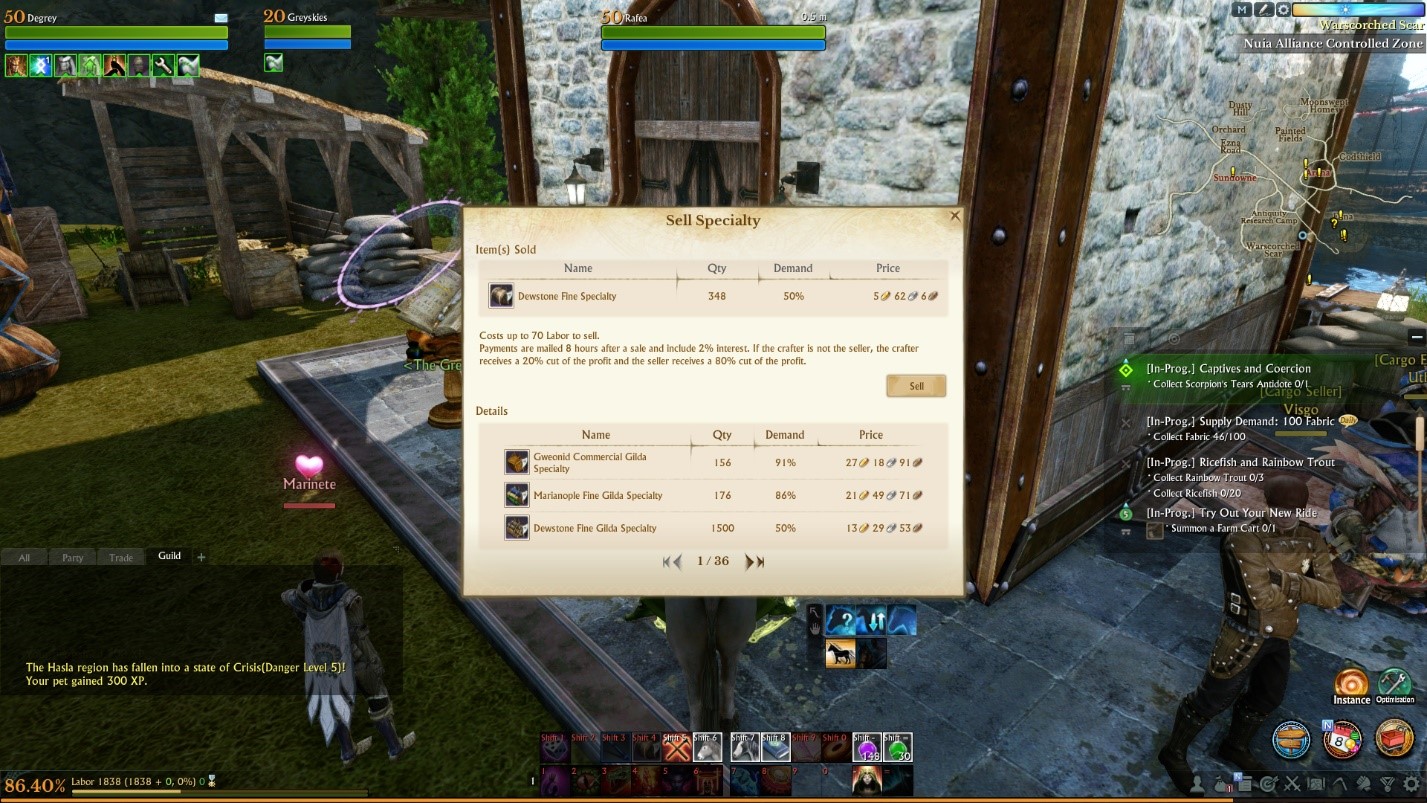 Take time to check with the pack purchasers in each zone.  There’s no reason you can’t run a pack to Solzreed before picking up the Blue Salt quests.

Since you can take them one day, complete them and take them again the next, I’ll often even double up and complete them twice every-other-day.  By focusing on trade packs that use things I already need to farm for my profession anyway, I also maximize my labor.  Rather than the get-rich-quick schemes you usually find in guides, I think looking for opportunities to complete multiple objectives in a single run ends up being more sustainable.  It’s just not as sexy, but the consistency and simplicity trump the occasional pow of other options.

That brings me to the final bit of advice, which is to join a family and a guild.  I know…  It’s the anti-social pot telling all the kettles they should go black, but it’s powerful.  Once in the guild and family, there should be a tab for daily quests.   The family quests in particular support my play style in that they each give 1000 vocation points when completed.  Better seeds and critters from the vocation vendor mean labor goes farther.  Also, leveling your family leads to a gain in vocation point accrual, so it’s well worth the single gold per member cost.

These are quests you complete through your normal gameplay, so it’s free rewards you might be missing out on.  Besides, even I can admit that games are more fun with other people.   Usually…   And MMOs probably more often than others, so don’t sit back and lone wolf it all.  There’s definitely room for those of us who like to go it alone, but the occasional communal adventure helps keep things interesting, and the rewards are well worth the effort.

Hopefully this helps a few folks find a more approachable path forward.   The shiny solutions work too, but they often require a lot of prep work to pull off or they’re just not as effective as they seem at first.  My way of things isn’t as slow as it sounds, but it’s definitely steady.  Being steady means you might end up being the rock your guild is built on, and that’s a pretty good place to be.