Elder Scrolls Online should have been one of those games that snagged my interest for a prolonged period, but I lost interest not long after release.  The PvP was in large part what didn’t appeal to me, and that made it harder to appreciate the rest of the game.  A lot of that was my fault because I expected the PvP to be more based on the RvR from Dark Age of Camelot, and those expectations made it difficult to appreciate what was actually in place.

There were a few other things about the game that felt a little flat to me and I eventually wandered away.  Though, I have to say in fairness that this is a relatively common thing in my life anyway due to the fact that I often have new games to write about and little time to play.  It typically happens even with games that I really like a lot.  In the case of ESO, there was just a few specific things that turned me off and the walk away was less external in nature than it normally would be, not to mention that it happened a little earlier than I’d originally expected.

I was skipping around Twitch looking for some background noise while I was at work a couple weeks ago and came across StarDancer streaming Elder Scrolls Online.   For the first time in quite a while, I found myself interested in what was different in the game.   I realized through the stream that a lot had changed since I’d played, and I found myself oddly interested in making a return to the game.

Elder Scrolls Online was soon reinstalled on my system and I’ve found myself enjoying it a lot more than I anticipated.  There are aspects to the game that I haven’t explored much yet, and I’m a little concerned about some of those.  I’ll be digging into a few of the things I’ve enjoyed since returning to the game and I’ll touch on what my worries about it are in today’s article.  With the Greymoor expansion approaching, I’m hoping this’ll help a few readers determine whether it’s worth the return for them or not.

Player-housing was a great addition to ESO and it was done in a way that didn’t feel distracting to me when I came across it for the first time while exploring in Elsweyr.

Even though Elder Scrolls Online touted itself as the first game since Arena to feature the entire continent of Tamriel, it never had that expansive feel I remembered from the first game.  A lot of the problem was nostalgia, but ESO limited players to only a third of the continent at a time early on and also forced classes on players in a way that felt limiting to me, as well.  That’s not to say that there wasn’t a whole lot of things done well at release, but I can’t say it really held up to the version of Arena that existed in my head.  Not an entirely fair comparison, but it’s one that was always going to happen anyway.

A lot of those early concerns have been addressed in expansions since ESO’s initial release.  Each of the expansion packs to come out so far included new content and new classes, even a new crafting profession in one case.  New guilds and questlines have all been added.  The list of new downloadable content is one of the more impressive catalogs I’ve seen for any online game.  The most impressive change in my book was the “One Tamriel” update, which unlocked the entire continent for all players.

You can now travel to any zone and do quests for any faction, effectively tripling the size of the game for any given character even without the copious amount of content added by expansions and DLC.  This was super smart in my book because it opened the game up for players.  In my group, some of us picked races we didn’t really want to play in order to be in the same faction as the rest of our friends.

There seem to be plenty of active players in active zones.  Enough that I have to switch to a custom tab to make sure I don’t miss chat from friends.

That choice is no longer forced on players, and while PvP still falls along faction lines in most cases, the ability to explore the game and group with players from any faction has made a large game feel huge.   For the first time, I logged in and really felt like the Elder Scrolls series was finally turning it around and getting larger for a change.  Daggerfall was smaller than Arena, Morrowind was smaller still, and while Oblivion was notionally larger, it didn’t really feel that way when I played it.

ESO feels massive now, and only part of that is land mass.  With so many new guilds to choose from, including the Psijic Order, and each with its own unique advancement system, quests, and associated skills, the scope of the game has dramatically changed.

I’m clearly not the only one finding the current version of the game interesting either, as the game is full of players.  In the two main hubs I wandered through during my recent time in the game, I felt like there was a very sizable player population with a lot of activity in chat (and I’m not sure any of that activity was gold farming or spamming at any point).  I did find traffic dropped a bit as I wandered into other zones, but it still was never uncommon to see a player wandering about the zone.

I’ve avoided PvP to this point and that’s honestly the part that worries me the most right now.  It was one of the things that killed my enjoyment of the game before and I’m tempted to just avoid it for a while.  Elder Scrolls games are about story and exploration, so I feel like I’ll find a lot more to enjoy in the game if I hold off and stick to the PvE portion of the game for now.

The issue I had with early PvP in ESO was that it felt less like a part of the world and story to me, and more like a minigame inside the larger game.  I thought the three-way faction brawl would feel like the same sort of epic tug of war that was so successful in games like DAoC and PlanetSide.  When I actually played, it came across as just something that wasn’t well connected to the rest of the game. 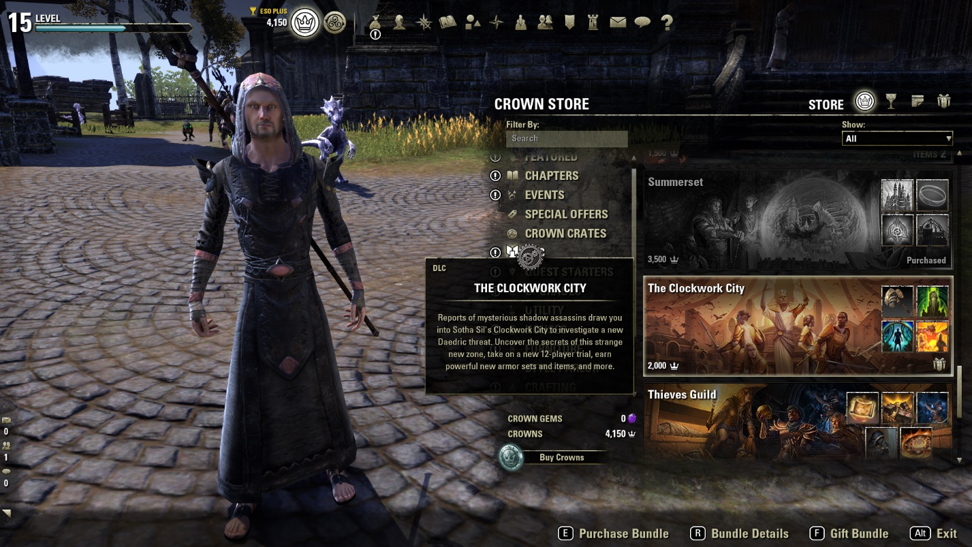 Most of the DLC looks really interesting, and then there’s the laundry list of cosmetic stuff.  I don’t really mind paying the subscription because the benefits feel like they’re well worth the cost.

The disjoined nature of the PvP just killed immersion for me, and that was disappointing.  PvP is often the driving force in robust player economies, so it’s always something that gets a lot of my attention.  It’s especially important in ESO where the story of the game is this large three-way struggle between factions to capture and control the Imperial City.  Instead of an epic war between factions, I ended up feeling like I was playing capture the flag in the woods with friends, though.

I think a lot of that was the matrix nature of the Cyrodiil map, which forced factions to fight along predictable lines from keep-to-keep.  There was more to it, of course, but the focus was on capturing the keeps around the center of the map in order to claim imperial authority and declare one member of the victorious faction Emperor.

I felt like that limited the ability of guilds to make strategic choices and forced factions into an imposed form of trench warfare fighting back and forth across the same ground over and over.  I’d like my PvP to be a little more dynamic and allow players to try different ideas, even make strikes behind enemy lines to help draw attention away from the main advance.

From what I’ve seen, there are several new PvP options, but none of them really went that immersive direction that I would have liked.  I suspect each form of PvP is probably fun in its own right, and that my expectations are likely getting in the way of an otherwise good design. 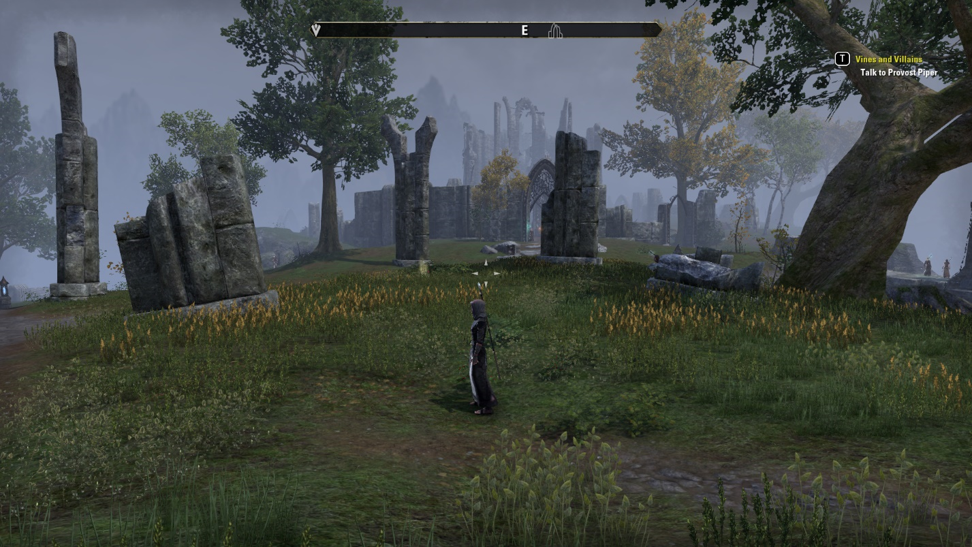 There’s a ton to explore throughout Tamriel, and so many quests that I have problems with my log being too full after heading to Daggerfall from Elsweyr.

Fears aside, I’m enjoying Elder Scrolls Online and have really been glad I got back into it.  I even ended up buying a few extra copies for several nephews and a niece to see if they’d like to check the game out.  It’ll be a good excuse to start another character or two and go play in some of the other zones, so I’m looking forward to it.

There are so many stories to explore in ESO now and it probably has the best list of available DLC I’ve ever seen in an MMO.  It doesn’t even look like junk content, either.  I saw plenty of DLC that grabbed my attention and content that I’d be interested in trying.  A lot of it was even group content that would be great to explore with friends, I think.

The reality is that I probably won’t have much time to really stay with ESO for long, but I feel like there’s a whole lot here and I easily could spend more time in the game if I didn’t have so many other big titles on the horizon.  There’s a great deal more complexity to the game currently than when I last played, and it’s a complexity that adds needed depth to Elder Scrolls Online.

I walked away from a game that felt like a decent MMO that was capitalizing on the Elder Scrolls franchise as a marketing gimmick.   I’ve returned to a game that actually feels like an extension of the Elder Scrolls universe.  It was such a pleasant surprise that I had to kick out an article and share it with readers.   If you’ve been bored and you’re looking for something to try between other releases over the next few months, this is one you should seriously consider.  At the very least, watch a few streams first and see if it captures your attention as readily as it caught mine.  I think you may be as pleasantly surprised as I was.

One thought on “Return To The Elder Scrolls Online”