TALKING A BIT ABOUT THE FUTURE OF TEMTEM

It’s already been over a month since Temtem’s release. During this month we’ve seen a constantly growing amount of questions around the game, its future, and its planned features. So, we want to take some time to share with you what we have in mind for the game so you can have a peek at what’s coming.

Please, keep in mind that every detail discussed here is not 100% confirmed for the game. During the game’s development cycle, ideas change constantly and stuff we like today we might not like as much tomorrow. So take everything in here not as confirmed facts, but more like the stuff we would like to include in the game.

The same thing happens with the planned dates. We’re not really big fans of having public dates for everything, they add a lot of unnecessary pressure on the team and they make making changes and swapping features around a very difficult task. We know everyone else likes dates though, so we’ve decided to include open dates for each block of features. Take them with a grain of salt and expect delays and features moved around dates.

Also, one of the motives to write this is to gather feedback around the ideas. So feel free to discuss them in our Discord, our forums or /r/PlayTemtem. Temtem is always built around its community so every idea is appreciated.

We’ve divided the Roadmap in two and we’ll also be talking a little more in-depth about some of the features depicted in the roadmap. 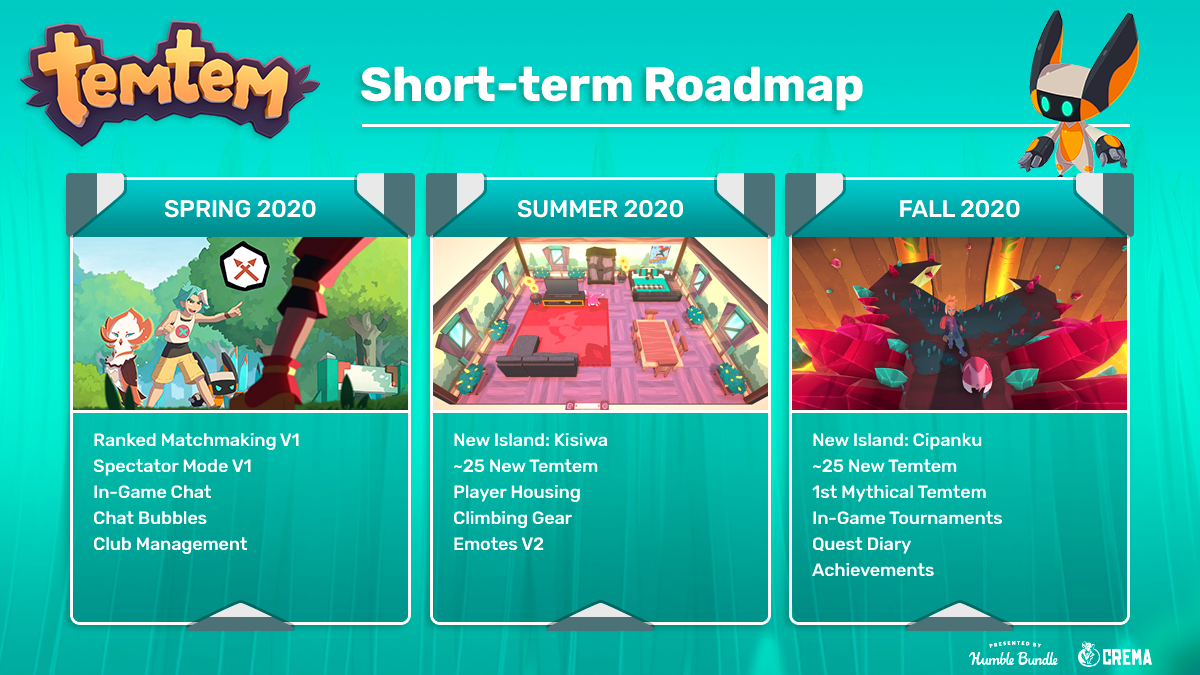 While we plan to do balance patches frequently during early access, our plan is to not be obsessed about reaching a perfect balance until the Temtem roster is complete (in the full final release). Due to having only a limited set of Tems and techniques, it is impossible to balance everything perfectly so we will mostly balance extra overpowered stuff that can break the current meta.

Even with a not so perfect balance, we’ve seen several team compositions and strategies already, so don’t be afraid of trying new things and step into Temtem’s competitive scene.

The first iteration of the matchmaking will include a player rating system based on ELO (aka TMR – Tamer Matchmaking Rating). Players will start with some placement matches which will define their initial TMR and after that, they will be matched with each other based on their current TMR.

For this first iteration of the matchmaking, we plan to give pansun rewards for each victory as a reward for the time spent battling (based on the opponent’s TMR). Although probably this feature will be disabled when the feature launches until the system is fully tested and stabilized.

This is probably one of the hottest topics in the community. We know it is very important for competitive players to jump into the competitive scene as quickly as possible and reduce the time and friction needed to tweak and test new stuff.

So, our idea to solve that is to introduce auto-scaling into the ranked queue. Auto-scaling will essentially perfect your Tems, upping all their SVs up to 50 for the battle and their level to the current level cap (currently 48). With auto-scaling, players will still need to capture and organize their teams, set their preferred TV spread using fruits or training, obtain the necessary gears completing the main or side quests in the game and breeding for their desired egg techniques. But, players won’t need to grind for perfect SVs or spend a fortune breeding to reach that point.

This auto-scaling will only apply to the ranked matchmaking queue, so there will be other game modes where having a perfect Temtem (and breeding for them) will be necessary (in-game tournaments, player organized tournaments and battles, dojo club wars, end-game PvE content, etc…).

Having a spectator mode has been one of the most requested features so far and while we already had it in our internal roadmap scheduled for later, we’ve decided to push it to the front due to the number of players requesting it. This first iteration of spectator mode will be a basic one and we will iterate on it in the future adding more options.

Basically, players will be able to spectate other players while they are playing a competitive match. While spectating, only the common info will be displayed (HP and STA percentages, team composition after the pick&ban, stages and status conditions, techniques used, etc.) so players won’t be able to use this feature to get leverage over their opponents.

We hope including this feature will also help tournament organizers solve some of the issues they’re currently facing.

The chat implementation we had during the Alpha / Stress test phases was a temporary one and it was lacking a lot of features, so we decided to disable it entirely for the early access release. Our plan is to remake the chat from scratch, increasing its performance and capabilities.

The chat will feature several predefined chat groups (e.g. Global, Local, Trade, Club…) and it will also support private messaging between users (whispers). We’re also going to add chat bubbles which will appear above every talking character. We know some players find chat bubbles a bit intrusive sometimes, so we will give players the choice between two different levels of chat bubbles (displaying the full text or just a notification to know they’ve talked) or disable them entirely.

Clubs are our take on clans for Temtem. Clubs have basically two main features related to them.

The first one is to be able to create a club, assign a banner to it, name it and invite all your friends to join. This will be the first part of the club features that we will tackle.

The second part is the Dojo Wars, which we’ll talk more about in the next part of the roadmap.

Every Temtem player will be able to acquire a house since they won’t be limited in quantity. We’re designing the Atoll Row (the physical location where all houses will be built) to be infinite so you don’t need to worry about buying permits or land. Technology in the Archipelago is amazing!

There’s one thing you’ll need to worry about though, decorating your house! You will be able to decorate your house using furniture bought and earned in-game, and every furniture store in the Archipelago will open their doors and will showcase different furniture in each island (in a similar way as the boutiques with the clothing options).

You will also be able to invite other players over so you can gather around your dining table or join other player’s houses and check how they’re decorating them. While houses will keep a predominant decorative functionality, we have some ideas to include useful furniture too in the future (think of things like an incubator, a jukebox, a fruit tree…).

We all love achievements. Whether they are something simple like completing the Tempedia or something more obscure like defeating an Ukama with a Head Charge, achievements are now part of most games and Temtem will not be less. Temtem will feature a full array of achievements that will reward players with the most precious currency of them all, bragging rights (although some of them will also potentially give some in-game rewards).

Achievements will be supported directly in-game, and we will also support achievements for every system we release on (as long as they have an achievements/trophies feature of course).

Hop in tomorrow in this same post for the second part of the roadmap, including the Trading House, the Dojo Wars, and details about the end-game island, after launch support and more!