Learn how-to breed all animals in Minecraft using this quick and simple guide! Here, we’ll show you how-to breed animals, what items you need to breed them, and other useful information for breeding those not so easy to work with animals.

THE BASICS OF BREEDING ANIMALS

In order to breed animals in Minecraft, you’ll need to feed each animal a certain type of food. Once fed, hearts will appear, indicating the animal is ready to breed. If another animal of the same kind is also fed and the two are within eight blocks of each other, they will breed and create a baby animal.

These two bred animals cannot breed again for five minutes and the baby animal will take twenty minutes to mature into an adult in most cases. Breeding animals generates a small amount of XP. 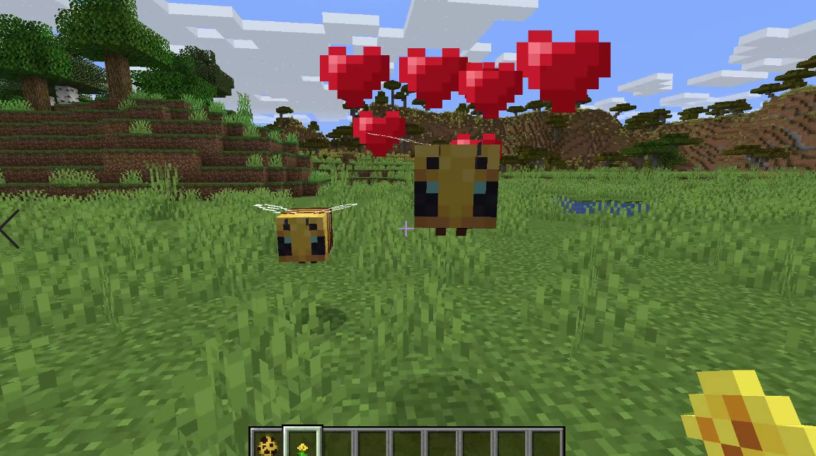 Bees love flowers and will follow a player holding one. Any type of flower will work. All you need to do is feed each bee a flower and they will breed, creating a baby bee! 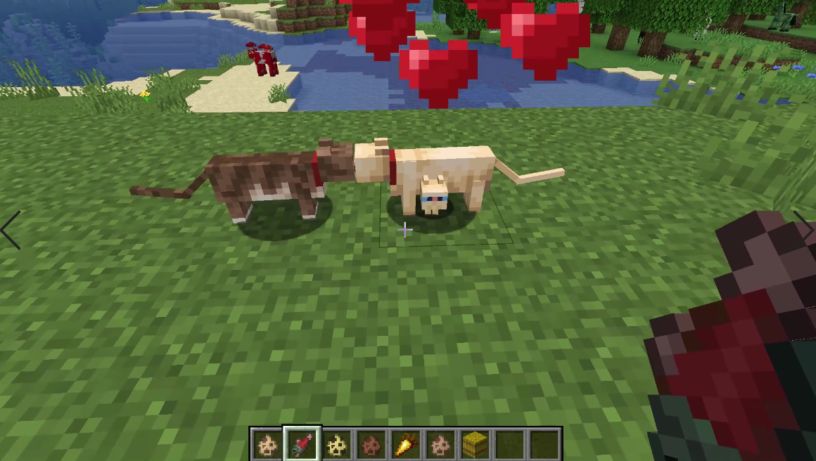 Before you can breed cats, you’ll need to tame them. You can tame cats by feeding them raw cod or raw salmon until hearts show up and a collar appears. Cats will generally run from players, so you might need to crouch and sneak up on them in order to get close enough to tame them. Once tamed, simply feed the two cats fish again. The kitten will be automatically tamed. 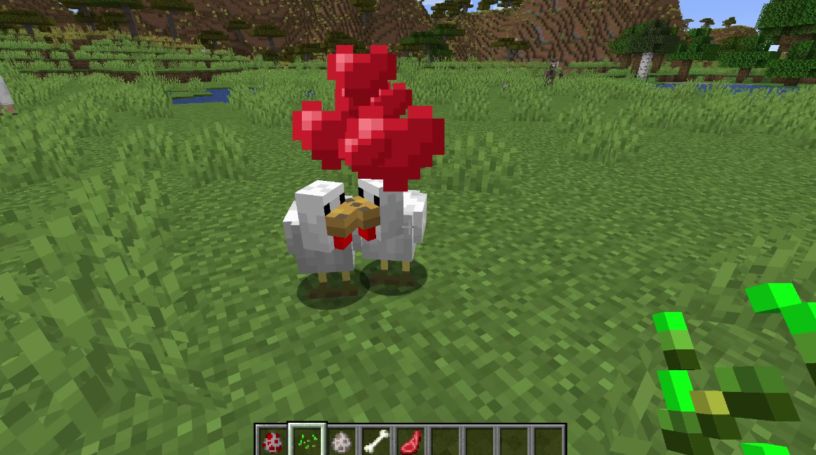 Chickens can be bred with beetroot seeds, melon seeds, pumpkin seeds, or wheat seeds. They will follow a player carrying any seeds. 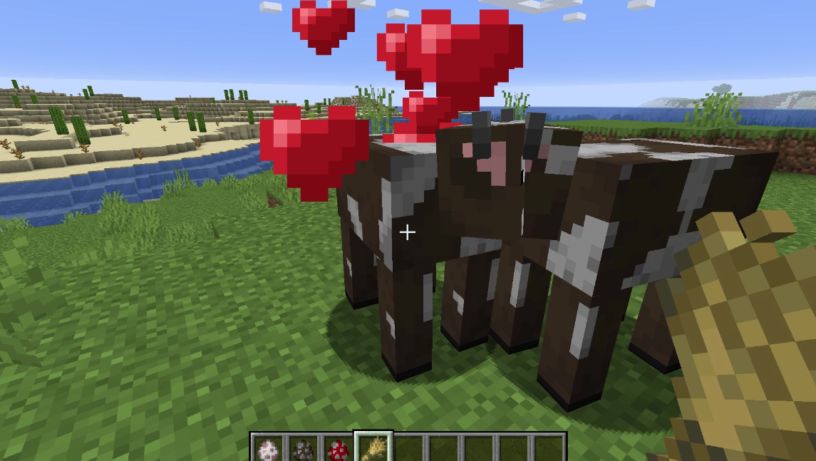 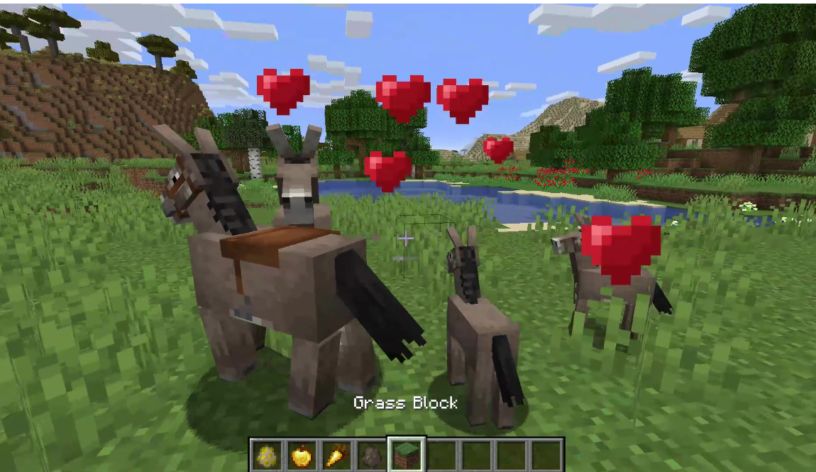 Donkeys must be tamed before they are able to be bred. You can tame a donkey by clicking on them. This will place the player on top of the donkey, who will continue to kick the player off until it is tamed.

Once tamed, donkeys can be fed either a golden apple or a golden carrot to breed. These items can be made using the crafting table as shown below. 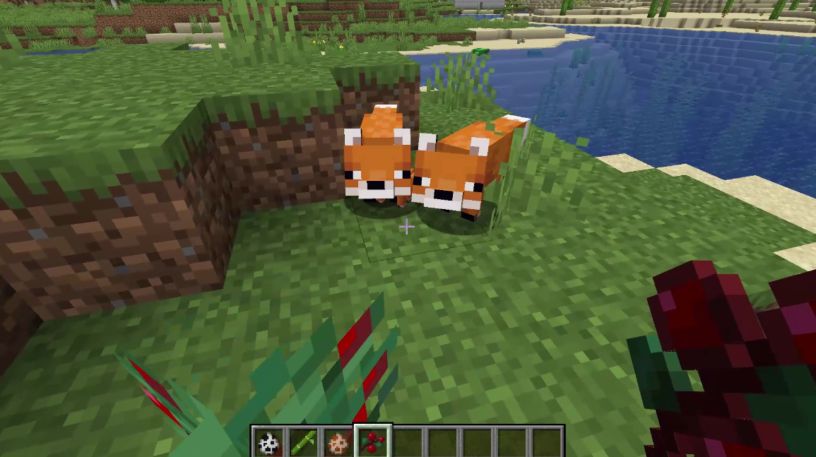 Breeding foxes can be tricky and quite frustrating. You’ll only find foxes in a tiaga biome. Just like cats, foxes will run from players who approach. In order to get close enough, you’ll need to be sneaking. The easiest way is to barricade the foxes by surrounding them in a two-block high area where they can’t escape. Once the two adult foxes are pinned in, feed them sweetberries, which can also be found within the tiaga biome. 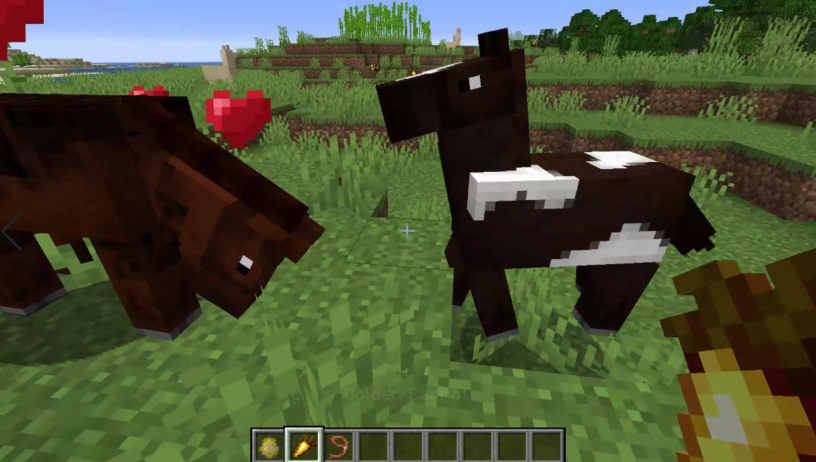 Just like donkeys, horses need to be tamed before they can be bred. Click on the horse you wish to tame over and over again until it stops kicking you off. Once tamed, horses can be bred by feeding two of them either a golden apple or a golden carrot. 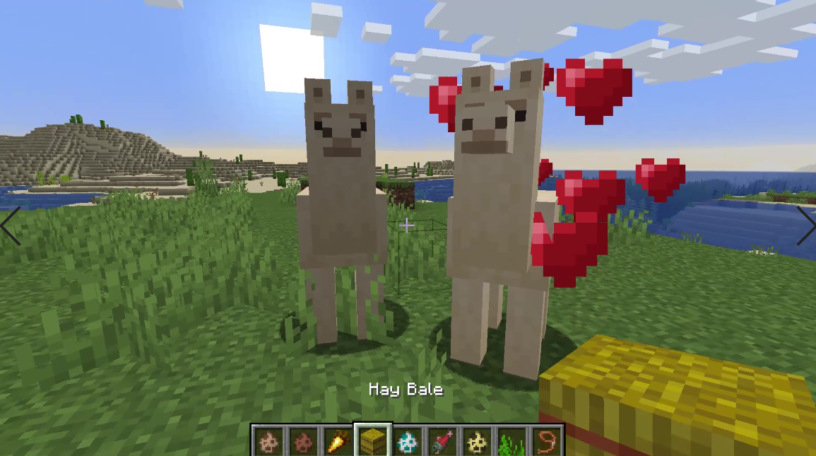 Llamas also need to be tamed in order to breed. Click on the llama until it stops kicking you off and shows hearts. Once tamed, feed two adult llamas a hay bale and they will breed. You can find hay bales piled up in villages or you can make them using the crafting table as shown below. 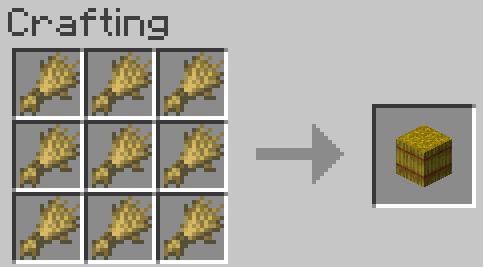 Llamas spawn naturally in savanna and mountain biomes. The wandering trader llamas cannot be bred, however. 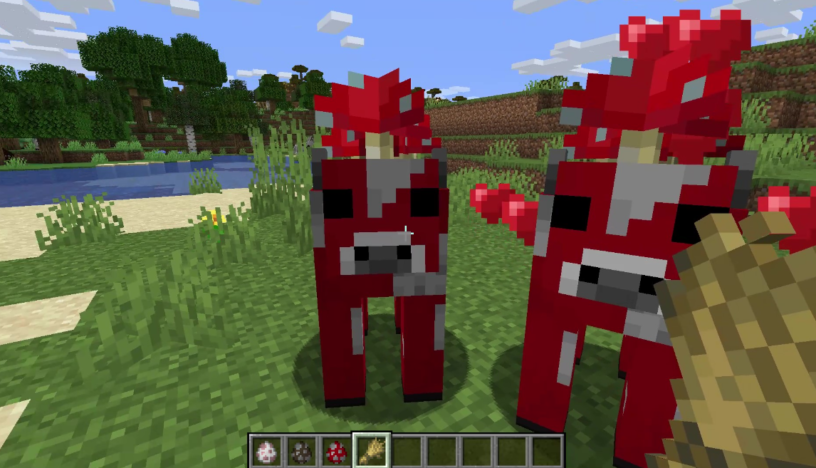 Mooshrooms are cow-like animals that are only found within the mushroom fields biome. Just like cows, these animals can be bred with wheat. 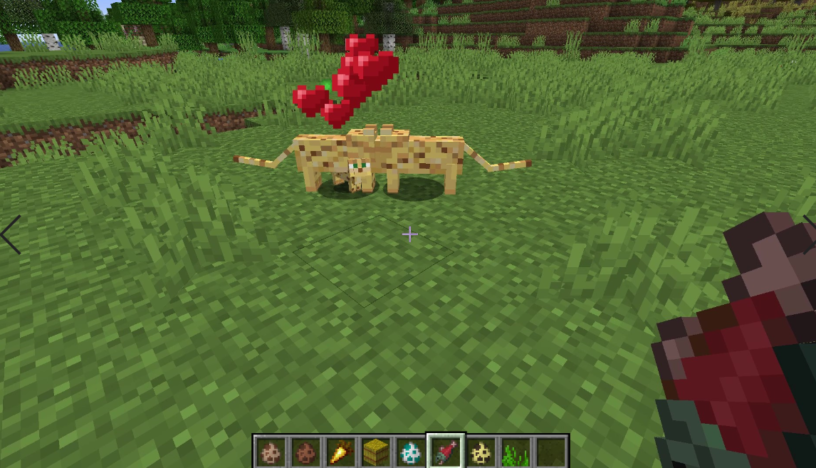 Similar to cats, ocelots are felines found in jungle biomes. They will run from players, so you will need to be sneaking. Feed them raw cod or raw salmon in order to gain their trust. Once tamed, feed the two adults fish again in order to breed them. 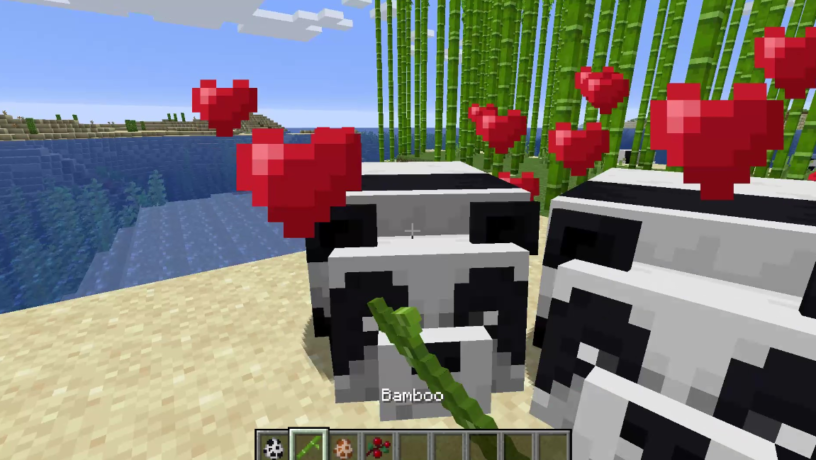 Pandas can be found in jungle biomes and love bamboo! They will follow players holding bamboo. In order to breed them, eight blocks of bamboo need to be within a five-block radius. Otherwise, the pandas will not breed and instead just eat the bamboo. 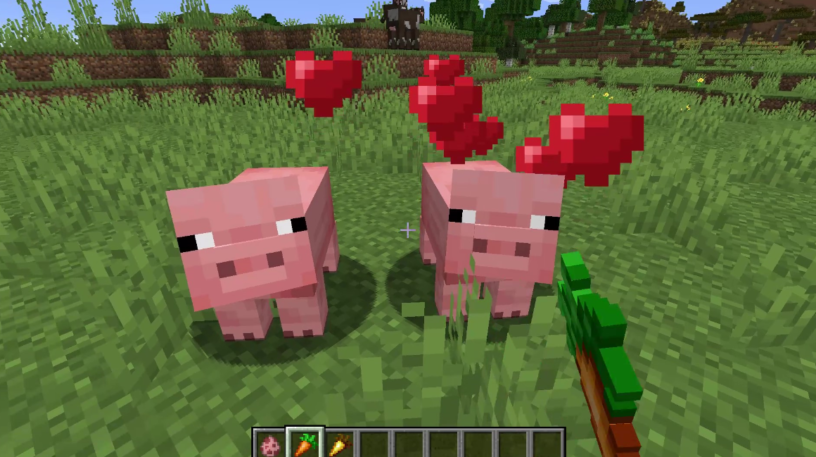 To breed pigs, simply feed them either a carrot, potato, or beetroot. They will follow players holding these items. 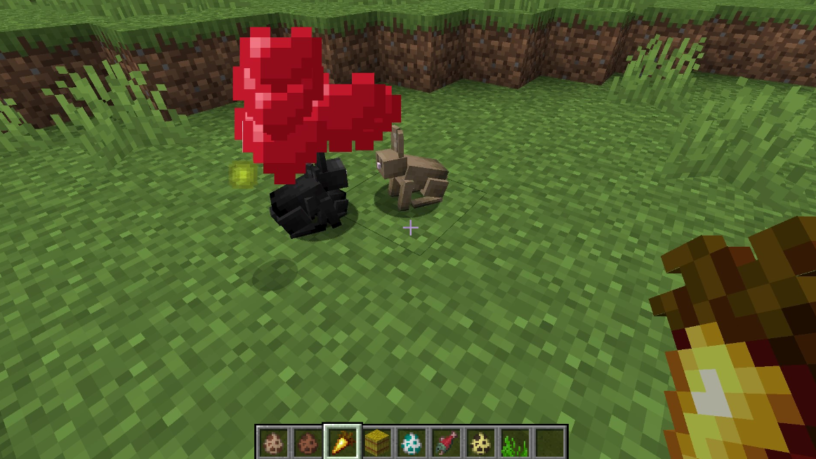 Rabbits generally run from players. However, if you hold either a carrot, a golden carrot, or dandelion, the rabbit will approach. These items can then be used to breed two adult rabbits. 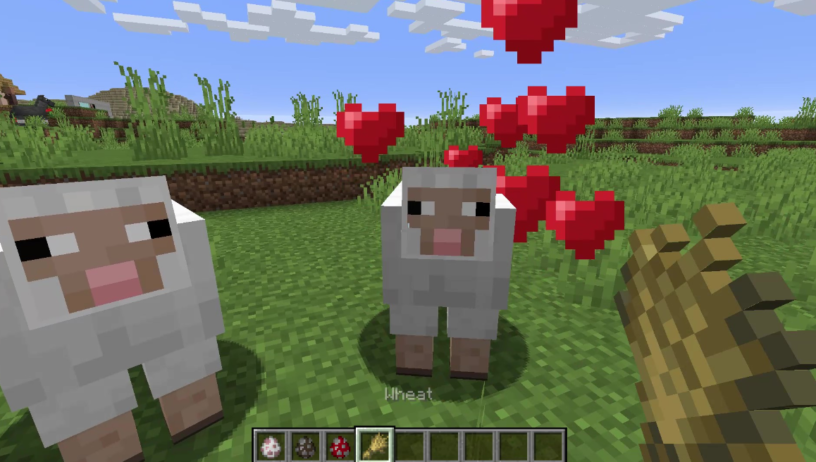 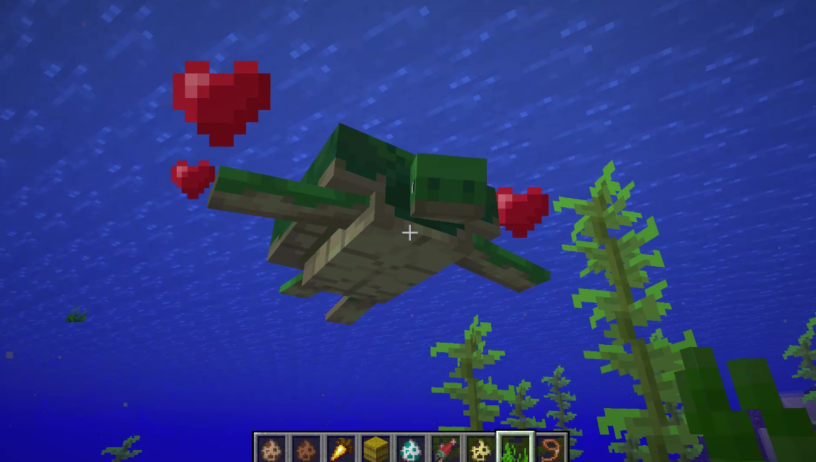 Breeding turtles takes a bit of work. Turtles spawn on beaches and can commonly be found swimming in the water. They will follow players holding seagrass and two turtles can be bred by feeding them this item. Seagrass can be picked up by using shears. Once the turtles breed, one will go to the shore and dig around for a long time before dropping turtle eggs. These eggs will eventually spawn turtles or players can pick up these eggs by using a silk touch pickaxe.

For more information, check out our guide on How-To Breed Turtles! 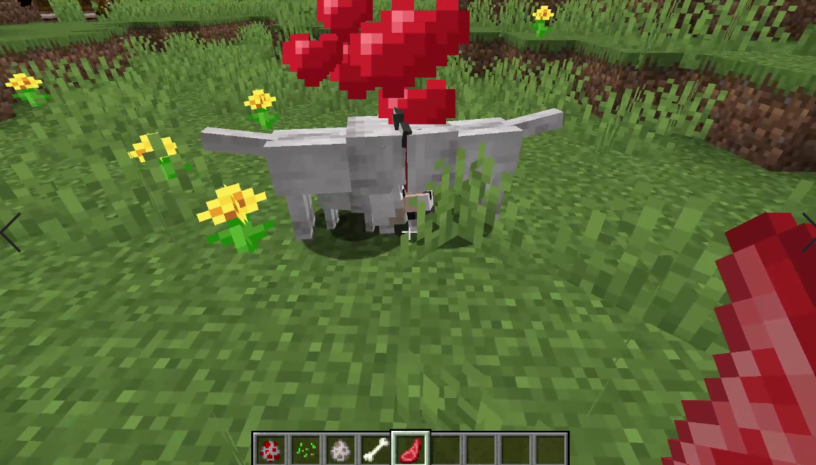 Wolves need to be tamed using bones before they can be bred. Once tamed, feeding two adult wolves any raw meat will enable them to breed. The baby pup will also be tamed to the owner of the parent wolves.