When a player enters a Solo Randomized Dungeon in a blue or yellow zone and no other player uses the portal in a certain time, the entry portal will disappear while the player is still inside the dungeon. Players already inside the dungeon can remain inside and can use the exit or A-ability to leave, but no new players will be able to enter.

Once a given entry portal is removed, a new entry portal will spawn elsewhere in the world. This will increase the overall number of “fresh” dungeons in these zones, while still allowing players to run solo dungeons together and follow others into a dungeon within a reasonable time window.

Players waiting to enter a cluster via the Smart Cluster Queue now also add to the total Disarray headcount in the cluster for which they are queueing. For example:

Additionally, the effects of Disarray, AKA the zerg debuff, no longer accelerate as quickly with higher player numbers. The new debuff thresholds can be seen in the chart below.

As a reminder, the following 3 attributes are affected by the debuff:

KNOWN ISSUE: The updated White Direboar skin has not yet been implemented for Mac OS / Linux / mobile. This will take place with an upcoming patch. 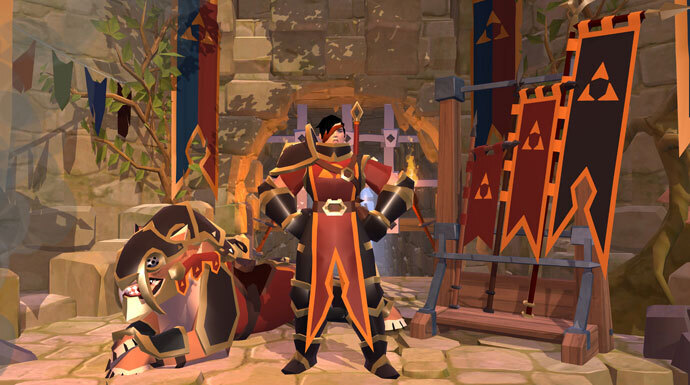 The thirteenth patch of the Queen update is now live, bringing optimizations to the Arena system and more chances to find Solo Randomized Dungeons in blue and yellow zones. Here’s what’s new:

The overall Fame earned from an Arena win has been doubled, from 20,000 Fame to 40,000 Fame per player on the winning team. And to make the Arena more lucrative for healers, winning players in a healing role will now receive an additional Adept’s Tome of Insight worth 10,000 Fame on top of the regular rewards.

Additionally, the Arena signup and notification UIs have been improved and streamlined, and clearly show the available daily rewards for each role. If you haven’t played an Arena match in a while, or have yet to visit the Arena, now is the perfect time!

In order to give beginner and intermediate-level players greater access to Solo Randomized Dungeons, the entrances of these dungeons in blue and yellow zones will now disappear a short time after the last player enters. Once a given entry portal is removed, a new entry portal is free to spawn elsewhere in the world. This will increase the overall number of “fresh” dungeons in these zones, giving newer players greater access to the full dungeon experience while still allowing players to run solo dungeons together and follow others into a dungeon within a reasonable time window.

Players waiting in a Smart Cluster Queue now contribute to the total Disarray headcount in the cluster for which they are queueing, while the overall curve for the Disarray debuff now accelerates more slowly.

Quality-of-life improvements now include a Destiny Board view prompt when a certain building type is not yet unlocked, plus improved descriptions for spells with scaled effects due to stacks.

As always, for the full details, you can check out the official patchnotes.